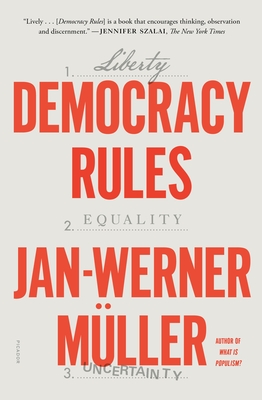 A much-anticipated guide to saving democracy, from one of our most essential political thinkers.

Everyone knows that democracy is in trouble, but do we know what democracy actually is? Jan-Werner Müller, author of the widely translated and acclaimed What Is Populism?, takes us back to basics in Democracy Rules. In this short, elegant volume, he explains how democracy is founded not just on liberty and equality, but also on uncertainty. The latter will sound unattractive at a time when the pandemic has created unbearable uncertainty for so many. But it is crucial for ensuring democracy’s dynamic and creative character, which remains one of its signal advantages over authoritarian alternatives that seek to render politics (and individual citizens) completely predictable.

Müller shows that we need to re-invigorate the intermediary institutions that have been deemed essential for democracy’s success ever since the nineteenth century: political parties and free media. Contrary to conventional wisdom, these are not spent forces in a supposed age of post-party populist leadership and post-truth. Müller suggests concretely how democracy’s critical infrastructure of intermediary institutions could be renovated, re-empowering citizens while also preserving a place for professionals such as journalists and judges. These institutions are also indispensable for negotiating a democratic social contract that reverses the secession of plutocrats and the poorest from a common political world.

Jan-Werner Müller is Roger Williams Straus Professor of Social Sciences at Princeton University. He has been a fellow at All Souls College, Oxford and has held many visiting professorships. His public affairs commentary has appeared in The New York Times, The Guardian, Foreign Affairs, The New York Review of Books, and the London Review of Books, among other publications. His book Fear and Freedom won the Bavarian Book Prize in 2019.

"Lively. . . This is one of those rare books about a pressing subject that reads less like a forced march than an inviting stroll . . . [Democracy Rules] is a book that encourages thinking, observation and discernment." —Jennifer Szalai, The New York Times

"Especially helpful is Müller’s emphasis on uncertainty as an essential democratic virtue . . . Usefully provocative . . . [Müller] does great service to our understanding of the stakes in contemporary politics by making clear that democracy is about more than free elections." —E. J. Dionne, The Washington Post

"In this fascinating, readable work, [Müller] helps readers understand exactly how democracy is meant to work . . . For such an all-encompassing, often messy, and contentious subject, the author maintains a concise, consistently informative narrative that explains key terms and theoretical frameworks in a way that should engage a wide audience . . . An essential examination of what democracy is and can be, how it can be abused or strengthened, and how we can move forward.” —Kirkus Reviews

“With characteristic brio and intellectual resourcefulness, Jan-Werner Müller invites us to rethink our fundamental political notion. He not only defuses much apocalyptic talk about the decay of democracy in this salutary book but also alerts us to its undiminished appeal and untested possibilities.” —Pankaj Mishra, author of Bland Fanatics and Age of Anger

“In this brilliant book, Jan-Werner Müller imagines a democratic politics that is fluid, creative, messy, and dynamic. He asks that we respect our fellow citizens’ right to participate, even when we vehemently disagree—and recognize that the search for the common good requires constant examination.” —Ro Khanna, member of Congress

“Few people are as well-equipped as Jan-Werner Müller to assess today’s heated debates about democracy. With unerring realism he examines the critical conditions necessary for democracies to function, reminding us of the essential role played by intermediary institutions such as parties, the idea of the loyal opposition, and the free press.” —Tamsin Shaw, professor of philosophy at New York University and author of Nietzsche’s Political Skepticism

“Erudite and urbane, but never condescending or ponderous, Jan-Werner Müller has been the greatest theoretician of what is happening to democracy in our time. Müller benefited immensely from keeping calm at a time when haste overwhelmed understanding. Never complacent, and never despairing, this book survives the wreckage of prognostications of democracy’s death and doom in the populist era.” —Samuel Moyn, author of The Last Utopia and Not Enough

“Democracy Rules is a superb work of democratic theory. It is passionately argued and elegantly written. Jan-Werner Müller’s claim that democracy is an experiment that dwells on possibility and constant institutional innovations defeats the myths that defending democracy equals simply defeating populism and that recognizing the current crisis of democracy equals losing faith in democracy as a political ideal.” —Ivan Krastev, author of After Europe and coauthor of The Light That Failed

“Democracy Rules captures the essence of our political moment. It clarifies the fundamental features of modern democracy and populism—following its arguments from the United States to India. It is engaging and engaged, without ever being partisan. It is based on deep academic learning, but its arguments are clear, principled, and accessible. And it makes a profound moral case that should matter to all our politicians and citizens today. This is political thought at its best.” —Rory Stewart, former U.K. International Development Secretary and author of The Places in Between and The Marches