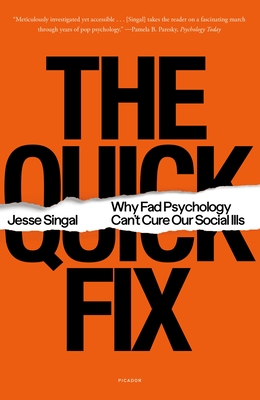 An investigative journalist exposes the many holes in today’s bestselling behavioral science, and argues that the trendy, TED-Talk-friendly psychological interventions will never be enough to truly address social injustice and inequality.

Through their viral TED Talks, bestselling books, and counterintuitive remedies for complicated problems, psychologists and allied social scientists have become leading thinkers of our time. “Power posing” and “grit,” they say, can help individuals overcome entrenched inequality in schools and the workplace. Positive psychologists inspired the U.S. Army to spend hundreds of millions of dollars on an intervention geared toward preventing PTSD in its combat soldiers. The implicit association test swept the nation on the claim that it can reveal unconscious biases and reduce racism in police and human resources departments. But what if much of the science underlying these blockbuster ideas is dubious or fallacious? What if Americans’ long-standing preference for simplistic self-help platitudes is exerting a pernicious influence on the way behavioral science is communicated and even funded, leading respected academics and the media astray?

In The Quick Fix, Jesse Singal examines the most influential ideas of recent decades and the shaky science that supports them. He begins with the California legislator who introduced self-esteem into the nation’s classrooms in the 1980s and the Princeton political scientist who warned of an epidemic of youthful “superpredators” in the 1990s. Both much-touted ideas had little basis in reality, but a massive impact.

Then, turning to the explosive popularity of twenty-first-century social psychology, Singal examines the misleading appeal of entertaining lab results and critiques the idea that the subtle unconscious cues known as “primes” shape our behavior. As he shows, today’s popular behavioral science emphasizes repairing, improving, and optimizing individuals rather than understanding and confronting the larger structural forces that drive social ills. The Quick Fix is a fresh and powerful indictment of the thought leaders and influencers who cut corners as they sell the public half-baked solutions to problems that deserve more serious treatment.

Jesse Singal is a contributing writer at New York and the former editor of the magazine’s Science of Us online vertical, as well as the cohost of the podcast Blocked and Reported. His work has appeared in The New York Times, The Atlantic, The Chronicle of Higher Education, Slate, The Daily Beast, The Boston Globe, and other publications. He is a former Robert Bosch Foundation fellow in Berlin and holds a master’s degree from Princeton University’s School of Public and International Affairs.

"Singal’s analysis is . . . a quick fix for readers who want to be more enlightened and thoughtful consumers of psychological science. It is also a bracing reminder that social realms in which there are Big Problems—such as crime, education and poverty—are beyond the reach of fads and quick fixes, no matter how seductive." —Sally Satel, The Wall Street Journal

"Singal has a skeptic’s keen eye for spotting shoddy claims, while remaining balanced in his assessments, and a knack for explaining complex statistical and methodological issues." —Aaron Kheriaty, First Things

"Engaging and persuasive . . . [Singal] wisely counsels us to resist the appeal of the monocausal explanation, the oversimplified narrative." —Michael M. Rosen, National Review

"Jesse Singal is America’s best social science journalist. In this book he shows that addressing social problems is hard, there is no quick fix, and we psychologists will have to be more careful in our work and restrained in our claims. Singal focuses on social psychology, but this book is a great read for anyone who wants to understand and ameliorate social problems." —Jonathan Haidt, professor at New York University—Stern School of Business, author of The Righteous Mind, and coauthor of The Coddling of the American Mind

"Meticulously investigated yet accessible . . . [Singal] takes the reader on a fascinating march through years of pop-psychology, revealing layer after layer of issues with concepts we’ve come to know — some of which are still quite popular." —Pamela B. Paresky, Psychology Today

"An overdue and very well-executed look at how many of the problems in social psychology run deeper than just the replication crisis. [The Quick Fix] covers topics of self-help books, posing and power, superpredators, bias tests, and much more." —Tyler Cowen, Marginal Revolution

"The Quick Fix is a great read, well-written in a lively style and aimed at general audiences . . . Even as a psychologist familiar with the replication crisis there are some deep dives here into a lot of important areas." —Christopher J. Ferguson, Psychology Today

“In order to explain the allure of fad psychology, Singal . . . presents this well-researched book that explains how half-baked behavioral science spreads . . . Readers can approach this book a chapter at a time, and overall, they will see Singal’s big picture of how ideas about self-esteem, bias tests, positive psychology, and other fads put limitations on everyone’s ability to dig deeper into these matters. This book will appeal to readers who want to understand the complexity of psychological issues.” —Jennifer Adams, Booklist

"Jesse Singal is one of the smartest, fairest, and most skeptical writers around. He is somehow able to delve into complex matters, give every side its due, and still render judgment. And—most amazing of all—he's an awful lot of fun to read." —Jonathan Chait, columnist at New York magazine and author of Audacity and The Big Con

"Combining dry humor with forensic research, The Quick Fix is an absorbing account of how media-friendly but largely spurious self-help ideas came to dominate our thinking about society's most complex problems. Yet it left me feeling unexpectedly inspired: once you've been disabused of the notion that changing the world might be simple, you're better equipped for the messy, reality-based challenge of actually making a difference." —Oliver Burkeman, author of Four Thousand Weeks: Time Management for Mortals