The Genesis of Misery (Paperback) 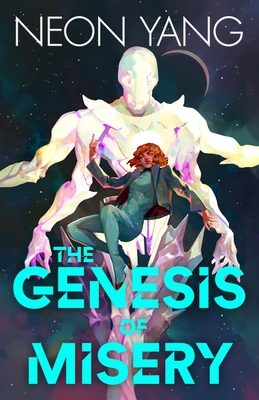 An immersive, electrifying space-fantasy, Neon Yang's debut novel The Genesis of Misery is full of high-tech space battles and political machinations, starring a queer and diverse array of pilots, princesses, and prophetic heirs.

"This is Joan of Arc meets Gideon the Ninth with a touch of Pacific Rim thrown in as a treat. A mind-blowing rollercoaster ride of a space opera, propulsive and strange in the best way."—Rebecca Roanhorse, New York Times bestselling author

It’s an old, familiar story: a young person hears the voice of an angel saying they have been chosen as a warrior to lead their people to victory in a holy war.

But Misery Nomaki (she/they) knows they are a fraud.

Raised on a remote moon colony, they don’t believe in any kind of god. Their angel is a delusion, brought on by hereditary space exposure. Yet their survival banks on mastering the holy mech they are supposedly destined for, and convincing the Emperor of the Faithful that they are the real deal.

The deeper they get into their charade, however, the more they start to doubt their convictions. What if this, all of it, is real?

A reimagining of Joan of Arc’s story given a space opera, giant robot twist, the Nullvoid Chronicles is a story about the nature of truth, the power of belief, and the interplay of both in the stories we tell ourselves.

Neon Yang (they/them) is a queer non-binary author based in the UK. They have been nominated for the Hugo, Nebula, World Fantasy, Lambda Literary, Ignyte, and Locus Awards, and their Tensorate series of novells (The Red Threads of Fortune, The Black Tides of Heaven, The Descent of Monsters and The Ascent to Godhood) was an Otherwise Award Honoree. In previous incarnations, Neon was a molecular biologist, a science communicator, a writer for animation, games and comic studios, and a journalist for one of Singapore's major papers.

"This is Joan of Arc meets Gideon the Ninth with a touch of Pacific Rim thrown in as a treat. A mind-blowing rollercoaster ride of a space opera, propulsive and strange in the best way." —Rebecca Roanhorse, New York Times bestselling author

“This vibrant tour de force presents a simultaneous embrace and inversion of Chosen One narratives. Yang’s prose is lush and gripping throughout, and [the] universe is complex and gorgeously rendered . . . This is a triumph.”—Publishers Weekly, starred review

“Come for the giant robot space battles, stay for the fascinating worldbuilding and the heartbreaking insight into the politics of fanaticism and emotional manipulation.”—Martha Wells, New York Times bestselling author of the Murderbot Diaries

“Neon Yang conjures a glittering, dangerous world where politics and religion clash in gemstone castles that float among the stars. Misery will tantalize, frustrate, and seduce you.”—Annalee Newitz, author of Autonomous

“Transmute the saintly Joan of Arc into a foul-mouthed and combative protagonist, decant them into a weird and wild far future, and strap in for a wrecking ball of a ride.”—Kate Elliott, author of Unconquerable Sun

“I would follow Misery to the ends of the universe and back, and there are many more characters to love along the way too. It is an adventure on a massive scale, action packed and fast-paced—oh and there’s a hot princess with a whip. Just in case you needed another reason to read this one.”—Tor.com

Praise for Neon Yang and The Tensorate Series:

“A fantastic novella . . . I can't wait to see what else Yang will do.”—Locus