Hiding in Plain Sight: The Invention of Donald Trump and the Erosion of America (Paperback) 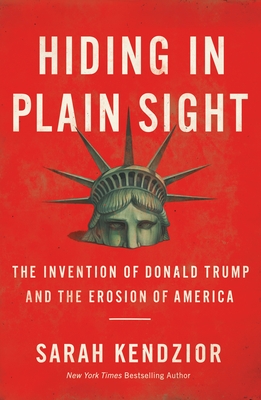 New York Times bestselling author Sarah Kendzior documents the truth about the calculated rise to power of Donald Trump since the 1980s and how the erosion of our liberties made an American dema­gogue possible.

Sarah Kendzior’s Hiding in Plain Sight pulls back the veil on a history spanning decades, a history of an American autocrat in the making. In doing so, she reveals the inherent fragility of American democracy – how our continual loss of freedom, the rise of consolidated corruption, and the secrets behind a burgeoning autocratic United States have been hiding in plain sight for decades.

In Kendzior’s signature and celebrated style, she expertly outlines Trump’s meteoric rise from the 1980s until today, interlinking key moments of his life with the degradation of the American political system and the continual erosion of our civil liberties by foreign powers. Kendzior also offers a never-before-seen look at her lifelong tendency to be in the wrong place at the wrong time – living in New York through 9/11 and in St. Louis during the Ferguson uprising, and researching media and authoritarianism when Trump emerged using the same tactics as the post-Soviet dictatorships she had long studied.

It is a terrible feeling to sense a threat coming, but it is worse when we let apathy, doubt, and fear prevent us from preparing ourselves. Hiding in Plain Sight confronts the injustice we have too long ignored because the truth is the only way forward.

Sarah Kendzior is the New York Times bestselling author of Hiding in Plain Sight and The View from Flyover Country. She is known for her reporting on St. Louis, her coverage of the 2016 election, and her academic research on authoritarian states. She is the co-host of the acclaimed podcast Gaslit Nation with Andrea Chalupa and was named by Foreign Policy as one of the “100 people you should be following on Twitter to make sense of global events.” Her reporting has been featured in many publications, including Politico, Slate, The Atlantic, Fast Company, The Chicago Tribune, TeenVogue, The Globe and Mail, and The New York Times. She lives in St. Louis.

"[Kendzior's] book documents Trump's 'decades-long erosion of American stability, integrity, and democracy.' I recommend it, especially if you have any doubt about what's at stake in this year's presidential election."
—Connie Schultz, Pulitzer Prize-winning columnist and author of forthcoming novel The Daughters of Erietown

"Sarah Kendzior, in her brilliant new book, is one of the few journalists who grasps what is happening. Kendzior is a student of autocracy... she has been warning from the get-go that Trump is working to turn America into one."
—David Cay Johnston, New York Times bestselling author of It's Even Worse Than You Think and Pulitzer-Prize winning journalist

"An amazing book about our current political situation and how we got here."
—Peter Gallagher

“It’s brilliant and also terrifying. You can’t look away.”
—Alex George, author of The Paris Hours

"[Hiding in Plain Sight] outlines how Trump's rise coincided with what ]Kendzior[ believes is the degradation of the American political system and the continual erosion of civil liberties in the country by foreign powers, revealing just how fragile American democracy is right now."
—International Business Times, Top 10 Best Books About Donald Trump in 2020

"A chilling account of how the media, government, and public have failed to hold Trump accountable, and how this has significantly impacted U.S. democracy."
—Library Journal Review

"Hiding in Plain Sight isn’t just about Trump, but about how crumbling democracies intent on rolling back the freedoms of its citizens create perfect conditions for the rise of dangerous autocrats."
—Bitch Magazine, 2020 Nonfiction Preview

"Impeccably researched...This comprehensive, page-turning account presents a stark and uncompromising indictment of the Trump presidency as the culmination of a 'decades-long erosion of American stability, integrity, and democracy." —Publishers Weekly

"If you only read one journalistic account of Donald Trump’s America make sure it is Sarah Kendzior’s Hiding in Plain Sight."
—The Socialist Review

"A scathing indictment of Donald Trump...Kendzior offers fresh views based on her experiences living in the declining economy of the Midwest and on observations as an academic researcher studying dictatorships in the former Soviet Union..... A passionate call for immediate action against the 'transnational crime syndicate' that has supplanted the U.S. government." —Kirkus

"Her highly readable and well-documented new narrative explains the development of an elite criminal network in America, how digital media has shaped repression and protest, and how globalization has allowed the proliferation of organized crime."
—National Review of Books

"Sarah Kendzior brings her unique perspective to bear in her engaging new book." —The Arts Fuse

"This is about our country. Irrelevant of whether you consider yourself to be on the right or the left.... Sarah has blown the whistle. The rich have gotten richer, the government has been stripped and the powerful are ever more so. You want to believe someone is on your page. That there’s someone to listen to, to inspire you... That’s Sarah Kendzior."
—Bob Lefsetz, The Lefsetz Letter

"Sarah Kendzior’s Hiding in Plain Sight should be required reading prior to the 2020 election. It shows the decline of American politics into the corruption that inhabits the Oval Office today.... By giving us a clear eyed view of what we’re up against, Sarah Kendzior has given us cause to continue the fight."
—PrimmLife

Praise for The View from Flyover Country

"Both prescient and honest...seeing the roots of the arguments that now dominate cable news is both fascinating and a little bit haunting in retrospect." —NPR

"Kendzior’s prose is sharp and consistent whether the essay is data dense or an opinion piece. She maneuvers through big issues with a pace and clarity that makes unpalatable topics fascinating, and unfortunately, relatable." — Hyperallergic

“The defining journalistic account of Trump’s America does complain, but it isn’t best-selling gossip fodder like Michael Wolff’s Fire and Fury or James Comey’s A Higher Loyalty. It’s the book from the Midwestern journalist who barely mentions the president’s name.”
—Record-Eagle

An academic, Midwesterner and firebrand, Kendzior crafts work that looks unflinchingly at what ails the country." —Shelf Awareness, starred review

"It’s a call to arms, highlighting the struggles of disenfranchised, overworked, and underpaid Americans, and urging our elected officials to recognize and address the inequalities that have become even more pronounced since when she originally wrote the essays." —The Village Voice

"The View From Flyover Country is well worth reading....Here is a thoughtful critic who knows how to sound the alarm." —The Arts Fuse

"Kendzior’s essays bring to light social injustice and economic inequality in Middle America from a voice that lives there." —Medium

“The talented Kendzior…writes intelligently and with great empathy about problems faced by the Midwest.” —New York Post

“Kendzior’s writing, while often concise and clever like this, is just as often backed by statistics, attributions or an illustrative profile…Though her message is alarming, it is softened with compassion.” —St. Louis Post-Dispatch

“An astonishment and a challenge to convention for all sorts of reasons…[One of the] books devoted to where we really were not very long ago, where we are now and where we might well be going. They don’t mess around. They play rough. But then the truth almost always does.” —Buffalo News

"From Russia to flyover country, Sarah Kendzior might be the voice we need." — Columbia Journalism Review

"Hers is a crystalline voice of reason and appraisal in a world that shifts further into unrecognizable territory minute-by-minute." — Carol Haggas, Booklist

"A collection of sharp-edged, humanistic pieces about the American heartland...Passionate pieces that repeatedly assail the inability of many to empathize and to humanize." — Kirkus

“Authoritarianism does not happen in a vacuum. Kendzior gives us valuable information about conditions in the forgotten parts of our country, which provided fertile ground for the rise of Trump.” —AMY SISKIND, AUTHOR OF THE LIST

“Urgent and beautifully expressed . . . What makes Kendzior’s writing so truly important [is that] it documents where the problem lies, by somebody who lives there. Read her.” —THE WIRE

“Kendzior is no psychic. She’s just whip-smart and an expert on authoritarian governments. She’s also that rare writer with an analyst’s brain and an empath’s heart… Though the essays are topical and political…one senses they’ll stand the test of time, just for the beauty of the prose and the soundness of the philosophy.” —STEFENE RUSSELL, ST. LOUIS MAGAZINE