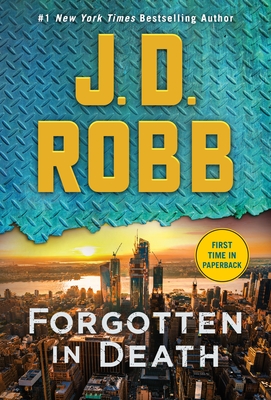 This is book number 53 in the In Death series.

In Forgotten in Death, the latest novel in J. D. Robb's #1 New York Times bestselling series, homicide detective Eve Dallas sifts through the wreckage of the past to find a killer.

The body was left in a dumpster like so much trash, the victim a woman of no fixed address, known for offering paper flowers in return for spare change—and for keeping the cops informed of any infractions she witnessed on the street. But the notebook where she scribbled her intel on litterers and other such offenders is nowhere to be found.

Then Eve is summoned away to a nearby building site to view more remains—in this case decades old, adorned with gold jewelry and fine clothing—unearthed by recent construction work. She isn’t happy when she realizes that the scene of the crime belongs to her husband, Roarke—not that it should surprise her, since the Irish billionaire owns a good chunk of New York. Now Eve must enter a complex world of real estate development, family history, shady deals, and shocking secrets to find justice for two women whose lives were thrown away…

"Forgotten in Death shows how a pro does it." - NPR

"The book’s real pleasure lies in watching Eve stride into danger and triumph over evil. That Roarke is happy to support his wife’s desire to go out and kick butt adds to the appeal. Series fans will be delighted." - Publishers Weekly

"Forgotten in Death draws you in quickly and keeps you glued to the pages...it's hard to believe how each one gets better and better. An amazing read, from the depth of callousness at the hands of the killer, to the honor of the cops investigating the deaths. If you want a read that will hold you spellbound, leave you tearing up, laughing, angry yet satisfied, then you want to get Forgotten in Death in your hands and hold on for the ride." - Fresh Fiction