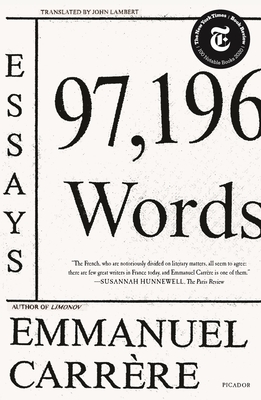 No one writes nonfiction like Emmanuel Carrère. Although he takes cues from such literary heroes as Truman Capote and Janet Malcolm, Carrère has, over the course of his career, reinvented the form in a search for truth in all its guises. Dispensing with the rules of genre, he takes what he needs from every available form or discipline—be it theology, historiography, fiction, reportage, or memoir—and fuses it under the pressure of an inimitable combination of passion, curiosity, intellect, and wit. With an oeuvre unique in world literature for its blend of empathy and playfulness, Carrère stands as one of our most distinctive and important literary voices.

97,196 Words introduces Carrère’s shorter works to an English-language audience. Featuring more than thirty extraordinary essays written over an illustrious twenty-five-year period of Carrère’s creative life, this collection shows an exceptional mind at work. Spanning continents, histories, and personal relationships, and treating everything from American heroin addicts to the writing of In Cold Blood, from the philosophy of Philip K. Dick to a single haunting sentence in a minor story by H. P. Lovecraft, from Carrère’s own botched interview with Catherine Deneuve to the week he spent following the future French president Emmanuel Macron, 97,196 Words considers the divides between truth, reality, and our shared humanity as it explores remarkable events and eccentric lives, including Carrère’s own.

John Lambert has translated Monsieur, Reticence, and Self-Portrait Abroad by Jean-Philippe Toussaint, as well as Emmanuel Carrère’s Limonov. He lives in Nantes with his wife and three children.

Emmanuel Carrère, novelist, filmmaker, journalist, and biographer, is the award-winning internationally renowned author of 97,196 Words, The Adversary (a New York Times Notable Book), Lives Other Than My Own, My Life As A Russian Novel, Class Trip, and The Mustache. Carrère lives in Paris.

"What distinguishes his prose is not its lyricism—as John Lambert’s translation conveys, it is simple and spare—but his intrusive, philosophical first-person voice . . . The core of Mr Carrère’s talent is precisely that he brings readers into sympathetic contact with others, powerful and powerless, insiders and outsiders . . . It is a masterful illusion." —The Economist

"97,196 Words is Carrère’s first collection of essays to be published in English, in a smooth translation by John Lambert. Many of the pieces go behind the scenes of his books, as it were, and read like sketches for what would later become paintings . . . the essays are delightful, plunging into the mysterious minds of people who tell honest lies." —Randy Rosenthal, The Los Angeles Review of Books

"When Carrère writes a story, he knows how to stir up powerful and conflicting emotions in his reader, which is one of the reasons he’s so good . . . If you’re interested in Carrère, this book of essays is a good place to start. It’s the best book I’ve read for ages." —William Leith, Evening Standard

“Carrère is masterly both at singling out the telling detail and of grasping and conveying his subject as a whole … This is political reportage at its most lively and acute … What is most compelling about his work is the quality of his mind, of his thinking. Of the scourging pressure of his need to understand.” —Robert Gottlieb, The New York Times Book Review

“At a time when ‘creative non-fiction’ seems to have become a synonym for memoir, it is a joy to be reminded of all the wonderful things that it can do when it looks beyond individual ego … All this is delivered in Carrère’s spare and supple prose.” —Kathryn Hughes, The Guardian

“Carrère’s style mixes research and reportage with personal anecdote—he has a keen wit, unrelenting self-honesty, and a touch of naughtiness … this is an excellent launching point to begin exploring his work” —Publishers Weekly

“In his native France it is precisely because his non-fiction exudes an erudite intimacy and lack of obfuscation that he is hailed as a writer who can be compared with Montaigne … The most striking thing about the 20 essays here is that they all emanate more or less from the same desire of wanting to know what it feels like to be someone else.” —Tobias Grey, The Financial Times

"There is a doubleness to being there; an immediate literary and philosophical transposition that Carrère indicated the contours of in his incredible, eponymous novel as 'the Kingdom' ... The same overlay, superimposition, or resemblance is what the essays collected in 97,196 Words mean to bring out. Carrère consistently paints himself into the picture; a ploy that is his hook, his key to unlocking the truth of all his subjects." —Arthur Willemse, World Literature Today

"The essays and articles collected here are invested with empathy as well as irony and rendered in lean, evocative prose ... his writing (well translated by John Lambert) should be of interest to anyone who cares about the expressive power of words." —David Luhrssen, The Shepherd Express