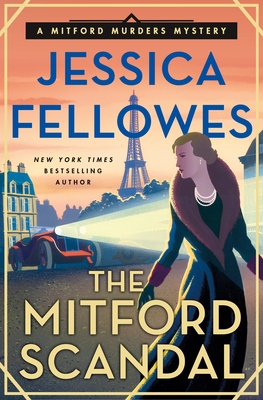 By Jessica Fellowes
$26.99
This title is likely Out of Print or otherwise unavailable

This is book number 3 in the The Mitford Murders series.

The year is 1928, and after the death of a maid at a glamorous society party, fortune heir Bryan Guinness seizes life and proposes to eighteen-year-old Diana, most beautiful of the six Mitford sisters. The maid's death is ruled an accident, and the newlyweds put it behind them to begin a whirlwind life zipping between London's Mayfair, chic Paris and hedonistic Berlin. Accompanying Diana as her lady's maid is Louisa Cannon, as well as a coterie of friends, family and hangers on, from Nancy Mitford to Evelyn Waugh.

When a second victim is found in Paris in 1931, Louisa begins to see links with the death of the maid. Now she must convince the Mitford sisters that a murderer could be within their midst . . . all while shadows darken across Europe, and within the heart of Diana Mitford herself.

JESSICA FELLOWES is an author, journalist, and public speaker. She is the author of The Mitford Murders novels as well as the New York Times bestselling official companion books to the Downton Abbey TV series. Former deputy editor of Country Life, and columnist for the Mail on Sunday, she has written for the Daily Telegraph, the Guardian, The Sunday Times, and The Lady. Jessica has spoken at events across the UK and US, and has made numerous appearances on radio and television. She lives in Oxfordshire with her family.

"In the scintillating fifth book in the Mitford Murders series, private detective Louisa Sullivan is hired to search for Jessica Mitford, the fifth of the six famous English sisters." - Shelf Awareness