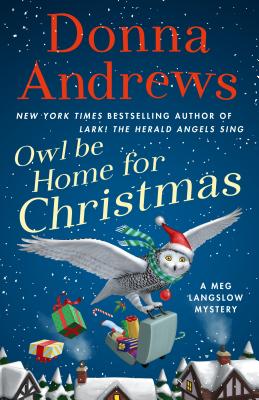 By Donna Andrews
$24.99
This title is likely Out of Print or otherwise unavailable

This is book number 26 in the Meg Langslow Mysteries series.

The 26th book and the sixth Christmas mystery in the Meg Lansglow series, Owl Be Home for Christmas is yet another wonderfully merry and funny book from New York Times bestselling author Donna Andrews.

It's a few days before Christmas, and Meg's grandfather is hosting a scientific conference on owls at the Caerphilly Inn. Most of the family are there, helping out in one capacity or another, including Meg's grandmother, Cordelia--invited by Grandfather in rare gesture of peace-making, to share her expertise on rehabilitating large birds, including owls. An unexpectedly severe snow storm traps the conference-goers in the hotel, and one of the visiting ornithologists is murdered. Even if Caerphilly is able to clear the roads in time, Chief Burke doesn't want the various suspects to scatter to half a dozen continents before he identifies the killer, so there's a very real possibility that none of them will make it home for Christmas . . . at least not unless Meg comes to the rescue.

Full of intrigue and snow, this Christmas mystery will take readers home to Caerphilly for Christmas.

DONNA ANDREWS has won the Agatha, Anthony, and Barry Awards, an RT Book Reviews Award for best first novel, and four Lefty and two Toby Bromberg Awards for funniest mystery. She is a member of the Mystery Writers of America, Sisters in Crime, and Novelists, Inc. Andrews lives in Reston, Virginia. She has written over 30 books in the Meg Langslow mystery series.

"Exceptional....[with] plenty of twists and turns en route to the satisfying ending. As always, spending time with Meg and her wonderful family is a delight. Andrews reinforces her place at the top of the cozy subgenre." —Publishers Weekly

"Andrews manages her large cast with dexterity and drops clues to the culprits’ identity, but the ending will catch most readers by surprise." —Publishers Weekly on How the Finch Stole Christmas!

"[A] satisfying, humorous entry in the long-running series." —Booklist on How the Finch Stole Christmas!

"Intrigue...amusement...Andrews reliably delivers. She also manages to slip in profundities and sentiments that warm the heart."—New York Journal of Books on Nightingale Before Christmas

The small town of Caerphilly, VA and its inhabitants provide a charming backdrop for this Christmas cozy.—Library Journal on Nightingale Before Christmas

"Meg, as well as her quirky extended family, makes this humorous cozy a holiday treat."—Booklist on Duck the Halls

"Andrews leavens the action with her trademark humor, including dueling Christmas dinners and an extravagant—and extravagantly funny—live nativity scene."—Publishers Weekly on Duck the Halls

"Produces at least one chuckle—and sometimes a guffaw—per page. Joy to the world, indeed."—Richmond Times-Dispatch on Six Geese A-Slaying

"A long-running series that gets better all the time. A fine blend of academic satire, screwball comedy, and murder." —Booklist on Lord of the Wings

"With its well-spun plots and distinctive characters, Andrews’s amusing avian-named series shows no signs of growing stale." —Publishers Weekly on Die Like an Eagle