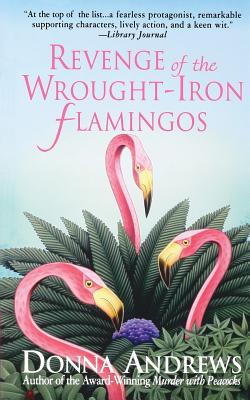 This is book number 3 in the Meg Langslow Mysteries series.

Every year, Yorktown, Virginia, relives its role in the Revolutionary War by celebrating the anniversary of the British surrender in 1781. This year, plans include a re-enactment of the original battle and a colonial craft fair. Meg Langslow has returned to her home town for the festivities--and to sell her wrought-iron works of art. Except, of course, for the pink-painted flamingos she reluctantly made for her mother's best friend--she's hoping to deliver them secretly, so she won't get a reputation as "the blacksmith who makes those cute wrought-iron flamingos."

Besides, she has taken on another responsibility--making sure none of her fellow crafters ruin the historical authenticity of the fair with forbidden modern devices--like wrist watches, calculators, or cell phones. She's only doing it to keep peace with the mother of the man she loves. And Michael himself will don the white-and-gold uniform of a French officer for the re-enactment--what actor could resist a role like that?

Meg's also trying to keep her father from scaring too many tourists with his impersonation of an 18th century physician. And to prevent a snooping reporter from publishing any stories about local scandals. Not to mention saving her naive brother, Rob, from the clutches of a con man who might steal the computer game he has invented. It's a tough job--at least, until the swindler is found dead, slain in Meg's booth with one of her own wrought-iron creations.

Now Meg must add another item to her already lengthy to do list: "Don't forget to solve the murder!"

Fortunately, the more trouble Meg faces, the more fun the reader will have--and Meg faces plenty of trouble in this lighthearted and funny novel.

DONNA ANDREWS has won the Agatha, Anthony, and Barry Awards, an RT Book Reviews Award for best first novel, and four Lefty and two Toby Bromberg Awards for funniest mystery. She is a member of the Mystery Writers of America, Sisters in Crime, and Novelists, Inc. Andrews lives in Reston, Virginia. She has written over 30 books in the Meg Langslow mystery series.