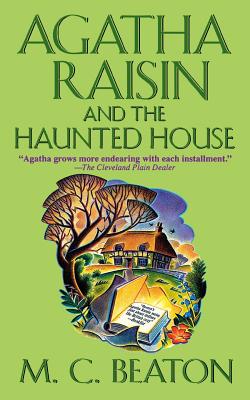 This is book number 14 in the Agatha Raisin Mysteries series.

Just back from an extended stay in London, Agatha Raisin finds herself greeted by torrential rains and an old, familiar feeling of boredom. When her handsome new neighbor, Paul Chatterton, shows up on her doorstep, she tries her best to ignore his obvious charms, but his sparkling black eyes and the promise of adventure soon lure her into another investigation.

Paul has heard rumors about Agatha's reputation as the Cotswold village sleuth and wastes no time offering their services to the crotchety owner of a haunted house. Whispers, footsteps, and a cold white mist are plaguing Mrs. Witherspoon, but the police have failed to come up with any leads, supernatural or otherwise. The neighbors think it's all a desperate ploy for attention, but Paul and Agatha are sure something more devious is going on. Someone's playing tricks on Mrs. Witherspoon, and when she turns up dead under suspicious circumstances, Agatha finds herself caught up in another baffling murder mystery.

“Once more, a murder mystery saves Agatha from the threat of boredom. It seems that handsome neighbor Paul has offered their investigative services to the owner of a reputedly haunted house. When the owner turns up dead, the pair know for sure something's going on. Another delightful series adventure.” —Library Journal

“Curmudgeonly but lovable Agatha Raisin cheerfully grouses her way through the English countryside in this cozy mystery. What at first seems to be a rather routine murder case gathers twists and turns--and a few more bodies--as it moves along.... Agatha is as on the mark as ever, and so is her author.” —RT Book Reviews