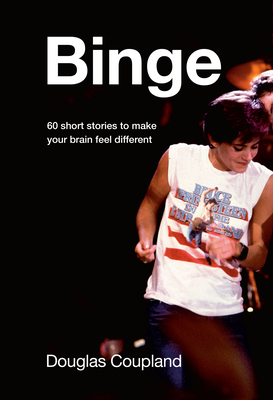 The first new work of fiction since 2013 from one of Canada's most successful, idiosyncratic and world-defining writers, Douglas Coupland. He's called it Binge because it's impossible to read just one.

Imagine feeling 100% alive every moment of every minute of the day! Maybe that's how animals live. Or trees, even. I sometimes stare at the plastic bag tree visible from my apartment window and marvel that both it and I are equally alive and that there's no sliding scale of life. You're either alive, or you're not. Or you're dead or you're not.

Thirty years after Douglas Coupland broke the fiction mould and defined a generation with Generation X, he is back with Binge, 60 stories laced with his observational profundity about the way we live and his existential worry about how we should be living: the very things that have made him such an influential and bestselling writer. Not to mention that he can also be really funny.

Here the narrators vary from story to story as Doug catches what he calls "the voice of the people," inspired by the way we write about ourselves and our experiences in online forums. The characters, of course, are Doug's own: crackpots, cranks and sweetie-pies, dad dancers and perpetrators of carbecues. People in the grip of unconscionable urges; lonely people; dying people; silly people. If you love Doug's fiction, this collection is like rain on the desert.

DOUGLAS COUPLAND is a Canadian writer, visual artist and designer. His first novel is the 1991 international bestseller Generation X: Tales for an Accelerated Culture, still celebrated for its biting humour and cultural relevancy thirty years since initial publication. He has published fourteen novels, two collections of short stories, eight nonfiction books. He has written and performed for England's Royal Shakespeare Company, is a columnist for The Financial Times of London and a frequent contributor to The New York Times. In 2000 Coupland amplified his visual art production and has recently had two separate museum retrospectives, Everything is Anything is Anywhere is Everywhere at the Vancouver Art Gallery, The Royal Ontario Museum and the Museum of Contemporary Canadian Art, and Bit Rot at Rotterdam's Witte de With Center for Contemporary Art, and Munich's Villa Stücke. In 2015 and 2016 Coupland was artist in residence in the Paris Google Cultural Institute. In May 2018, his exhibition on ecology, Vortex, opened at the Vancouver Aquarium. Coupland is a member of the Royal Canadian Academy, an Officer of the Order of Canada, an Officer of the Order of British Columbia, a Chevalier de l'Ordre des Arts et des Lettres and a recipient of the Lieutenant Governor's Award for Literary Excellence.

“The 60 pieces of micro-fiction found in [Binge]—sometimes linked, occasionally by plotline, but mainly by recurring characters—are precisely honed. . . . Hooks abound in Binge, pulling readers from one bite-sized story . . . to the next.” —Maclean’s

"[A] mind-bender. . . . Coupland’s voice is as clever as ever, creating a specific sense of place.” —Winnipeg Free Press