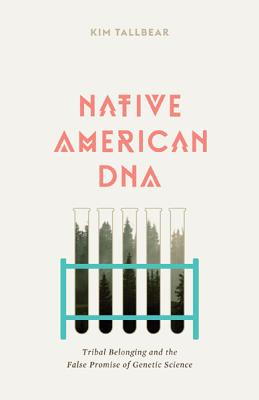 By Kim TallBear
$32.20
Available from our Distributors - Usually arrives in-store in 2-7 days

Who is a Native American? And who gets to decide? From genealogists searching online for their ancestors to fortune hunters hoping for a slice of casino profits from wealthy tribes, the answers to these seemingly straightforward questions have profound ramifications. The rise of DNA testing has further complicated the issues and raised the stakes.

In Native American DNA, Kim TallBear shows how DNA testing is a powerful—and problematic—scientific process that is useful in determining close biological relatives. But tribal membership is a legal category that has developed in dependence on certain social understandings and historical contexts, a set of concepts that entangles genetic information in a web of family relations, reservation histories, tribal rules, and government regulations. At a larger level, TallBear asserts, the “markers” that are identified and applied to specific groups such as Native American tribes bear the imprints of the cultural, racial, ethnic, national, and even tribal misinterpretations of the humans who study them.

TallBear notes that ideas about racial science, which informed white definitions of tribes in the nineteenth century, are unfortunately being revived in twenty-first-century laboratories. Because today’s science seems so compelling, increasing numbers of Native Americans have begun to believe their own metaphors: “in our blood” is giving way to “in our DNA.” This rhetorical drift, she argues, has significant consequences, and ultimately she shows how Native American claims to land, resources, and sovereignty that have taken generations to ratify may be seriously—and permanently—undermined.

Kim TallBear is associate professor of Anthropology at the University of Texas at Austin.

"Native American DNA is a book of far wider scope than its title, establishing the author as a leading authority on the topic. The politics of tribal DNA is but the starting point of a complex analysis that encompasses the whole framework in which DNA is appropriated in the study of human populations. Molecular geneticists, science studies researchers, legal scholars—and of course Native Americans—will find their horizons considerably broadened and newly engaged."—Troy Duster, New York University

"Native American DNA is a gracefully written, powerfully argued, and urgently needed examination of indigenous identity and politics after the genomic turn. This is pathbreaking work."—Alondra Nelson, Columbia University

"TallBear’s description of the science of DNA testing is remarkably clear, and her skepticism about its claims is well founded."—Journal of American History

"Essential reading for researchers in all fields of Indigenous studies."—American Indian Quarterly