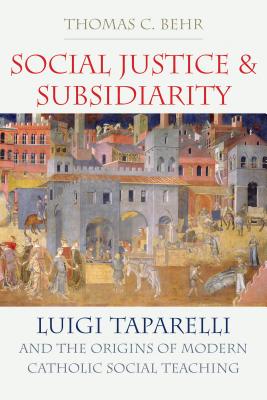 By Thomas C. Behr
Likely Out of Print, but possibly available from the Publisher. Call for more info

Luigi Taparelli, SJ, 1793-1862, in his Theoretical Treatise of Natural Right Based on Fact, 1840-43, presents a neo-Thomistic approach to social, economic, and political sciences grounded in an integral conception of the human person as social animal but also as rational truth seeker. His conceptions of social justice and of subsidiarity are fundamental to modern Catholic social teaching (CST). His work moves away from traditionalist-conservative reaction in favor of an authentically human, moderately liberal, modernity built on the harmony of faith and reason. He zealously deconstructs laissez-faire liberal ideology and its socialist progeny in scores of articles in the Civilt Cattolica, the journal that he co-founded in 1850. His arguments figure prominently in the Syllabus of Errors (1864) of Pius IX. Though a moderate liberal himself, his reputation as anti-liberal reactionary and defender of Papal temporal sovereignty is the chief reason why Pope Leo XIII later sought to quiet Taparelli's contribution to the foundations and pillars of modern CST that began with the restoration of Thomistic philosophy in Aeterni Patris (1879), and the "magna carta" of modern Catholic social teaching, Rerum Novarum (1891). Pius XI relies heavily on Taparelli's concept of subsidiarity in Quadragesimo Anno (1931), and sought to advance interest in Taparelli studies. However, Taparelli's eclectic philosophical orientation and writing style have been a considerable stumbling block. In this present book, Taparelli's ideas are evaluated both for their philosophical character but also in their historical context. Taparelli's theories of the just society and ordered liberty, are as timely nowadays for reasoned political and ethical discourse as ever. The book includes an appendix of translated portions of the Theoretical Treatise of Natural Right Based on Fact that relate to subsidiarity.

Thomas C. Behr is assistant professor and faculty director of liberal studies at the University of Houston.