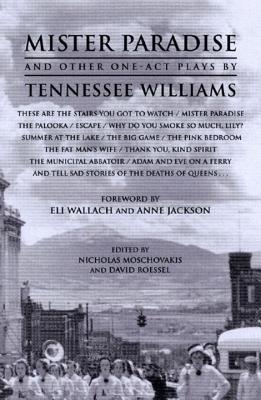 This is book number 1007 in the New Directions Paperbook series.

Tennessee Williams had a distinct talent for writing short plays and, not surprisingly, this remarkable new collection of never-before-published one-acts includes some of his most poignant and hilarious characters: the indefatigable, witty and tough drag queens of And Tell Sad Stories of the Deaths of Queens...; the strange little man behind the nom de plume Mister Paradise; and the extravagant mistress who cheats on her married man in The Pink Bedroom. Most were written in the 1930s and early 1940s when Williams was already flexing his theatrical imagination. Chosen from over seventy unpublished one-acts, these are some of Williams's finest; several have premiered recently at The Hartford Stage Co., The Kennedy Center, the Manhattan Theatre Club and the Tennessee Williams/New Orleans Literary Festival. Included in this volume:

Tennessee Williams (1911-1983) is the acclaimed author of many books of letters, short stories, poems, essays, and a large collection of plays, including The Glass Menagerie, A Streetcar Named Desire, Camino Real, Cat on a Hot Tin Roof, Orpheus Descending, The Night of the Iguana, and The Rose Tattoo.

"Summer at the Lake" shows the young author contemplating his restlessness and toxic love of his overbearing and manipulative mother.
— John Lahr - The New Yorker

The plays have an immediacy and spontaneity that make them akin to snapshots.
— Olivia Jane Smith - Gambit Weekly