Amerika: The Man Who Disappeared (Paperback) 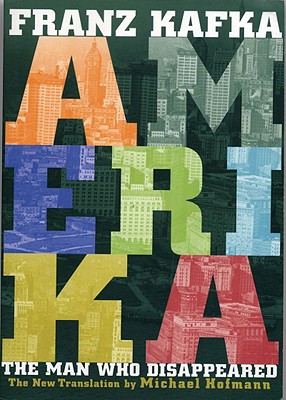 By Franz Kafka, Michael Hofmann (Translated by), Horace Gregory (Afterword by)
$13.95
On Our Shelves Now - Please call to confirm stock for hot titles

Newly restored to the original text: for this new translation, Hofmann returned to Kafka’s manuscripts, restoring matters of substance and detail, and even the book’s original ending.

Michael Hofmann's startlingly visceral and immediate translation revives Kafka's great comedy, and captures a new Kafka, free from Prague and loose in the new world, a Kafka shot through with light in this highly charged and enormously nuanced translation. Kafka began the first of his three novels in 1911, but like the others, Amerika remained unfinished, and perhaps, as Klaus Mann suggested, "necessarily endless." Karl Rossman, the youthful hero of the novel, "a poor boy of seventeen," has been banished by his parents to America, following a scandal. There, with unquenchable optimism, he throws himself into adventure after misadventure, and experiences multiply as he makes his way into the heart of the country, to The Great Nature Theater of Oklahoma. In creating this new translation, Hofmann, as he explains in his introduction, returned to the manuscript version of the book, restoring matters of substance and detail. Fragments which have never before been presented in English are now reinstated including the book's original "ending."

The San Francisco Chronicle said Hofmann’s “sleek translation does a wonderful job” and The New York Times concurred:  “Anything by Kafka is worth reading again, especially in the hands of such a gifted translator as Hofmann.”

Franz Kafka (1883–1924) was one of the most important writers of the twentieth century. His major novels include The Trial, The Castle, and Amerika.

The poet Michael Hofmann has won numerous prizes for his German translations.

Horace Gregory was born and grew up in Milwaukee. He was a poet, critic, essayist, translator and biographer, who taught at Sarah Lawrence College for 26 years. He was a member of the National Academy-Institute of Arts and Letters and received the Bollingen Prize for poetry in 1965.

Anything by Kafka is worth reading again, especially in the hands of such a gifted translator as Hofmann.
— The New York Times Book Review

Hofmann's translation is invaluable....It achieves what translations are supposedly unable to do: it is at once 'loyal' and 'beautiful.'
— John Zilcosky - New Republic

Hofmann's slick, sleek translation does a wonderful job of keeping those competing forces in balance.
— The San Francisco Chronicle

Unpredictable and funny, as close to a Buster Keaton comedy as you can get.
— Jim Krusoe - Los Angeles Times Book Review

Michael Hofmann’s magnificent new translation restores its rightful place as one of Kafka’s most delightful and most memorable works.
— Charles Simic

Hofmann’s ability to overcome the obstacles presented by this particular work from Kafka marks this as the best translation.
— Kirkus Reviews