As Long as Grass Grows: The Indigenous Fight for Environmental Justice, from Colonization to Standing Rock (Hardcover) 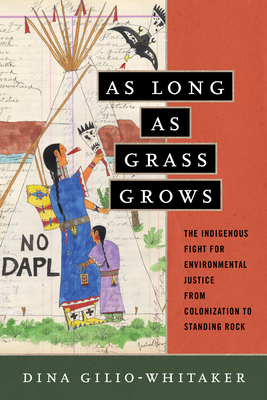 By Dina Gilio-Whitaker
$25.95
Available from our Distributors - Usually arrives in-store in 2-7 days

The story of Native peoples’ resistance to environmental injustice and land incursions, and a call for environmentalists to learn from the Indigenous community’s rich history of activism

Through the unique lens of “Indigenized environmental justice,” Indigenous researcher and activist Dina Gilio-Whitaker explores the fraught history of treaty violations, struggles for food and water security, and protection of sacred sites, while highlighting the important leadership of Indigenous women in this centuries-long struggle. As Long As Grass Grows gives readers an accessible history of Indigenous resistance to government and corporate incursions on their lands and offers new approaches to environmental justice activism and policy.

Throughout 2016, the Standing Rock protest put a national spotlight on Indigenous activists, but it also underscored how little Americans know about the longtime historical tensions between Native peoples and the mainstream environmental movement. Ultimately, she argues, modern environmentalists must look to the history of Indigenous resistance for wisdom and inspiration in our common fight for a just and sustainable future.

Dina Gilio-Whitaker (Colville Confederated Tribes) is the policy director and a senior research associate at the Center for World Indigenous Studies and teaches American Indian Studies at California State University San Marcos. She is the coauthor, with Roxanne Dunbar-Ortiz, of “All the Real Indians Died Off” and 20 Other Myths About Native Americans. She lives in San Clemente, California.

“Gilio-Whitaker takes the reader on a historical journey that, had it been penned about the Jewish Holocaust or the ‘ethnic cleansing’ conducted at the behest of any number of twentieth-century despots, would be well known. Yet when it comes to the United States’s continuing campaign to wipe tribal communities from the map, most Americans are in a state of denial that such a thing could happen.”
—Los Angeles Review of Books

“An important and accessible work recommended for students and scholars of political ecology from the undergraduate level up. Gilio-Whitaker’s far-reaching work creates a compelling foundation upon which to add specific examples of the ongoing struggle for environmental justice and Indigenous rights during times of anthropogenic climate change. By connecting Native American history with the environmental justice movement in a clear and comprehensive manner, Gilio-Whitaker clarifies the depth of the wrong-doings of the past, while also opening the door to a wide range of opportunities for positive change in the future.”
—Journal of Political Ecology

“A masterpiece and a vital road map for the ongoing fight for Indigenous sovereignty. With every heartbreaking example of sacred sites decimated and traditional knowledge suppressed, the power and resilience of Indigenous people, preserving not only their culture but their very lives, shines through. Powerful, urgent, and necessary reading.”
—Roxanne Dunbar-Ortiz, author of An Indigenous Peoples’ History of the United States

“The process of genocide, which began five centuries ago with the colonization of the Americas and the extermination of indigenous people, has now spread to the planetary level, pushing two hundred species per day to extinction and threatening the entire human species. Dina Gilio-Whitaker’s As Long as Grass Grows makes these connections, holding the seeds of resistance, the seeds of freedom, and the promise of a future.”
—Vandana Shiva, author of Earth Democracy

“As Long as Grass Grows honors Indigenous voices powerfully and centers Indigenous histories, values, and experiences. It tells crucial stories, both inspiring and heartrending, that will transform how readers understand environmental justice. I know many readers will come away with new ideas and actions for how they can protect our planet from forces that seek to destroy some of our most sacred relationships connecting human and nonhuman worlds—relationships that offer some of the greatest possibilities for achieving sustainability.”
—Kyle Powys White, associate professor, Michigan State University

“From Standing Rock’s stand against a damaging pipeline to antinuclear and climate change activism, Indigenous peoples have always been and remain in the vanguard of the struggle for environmental justice. As Long as Grass Grows could not be of more relevance in the twenty-first century. Gilio-Whitaker has produced a sweeping history of these peoples’ fight for our fragile planet, from colonization to the present moment. There is nothing else like it. Read and heed this book.”
—Jace Weaver, author of Defending Mother Earth

“In As Long as Grass Grows, Gilio-Whitaker skillfully delineates the stakes—and the distinctive character—of environmental justice for Indigenous communities. Bold, extensive, accessible, and inspiring, this book is for anyone interested in Indigenous environmental politics and the unique forms of environmentalism that arise from Native communities. Indeed, as Gilio-Whitaker shows, these topics are intertwined with a pressing issue that concerns all people: justice for the very lands we collectively inhabit.”
—Clint Carroll, author of Roots of Our Renewal

“As Long as Grass Grows is a hallmark book of our time. By confronting climate change from an Indigenous perspective, not only does Gilio-Whitaker look at the history of Indigenous resistance to environmental colonization, but she points to a way forward beyond Western conceptions of environmental justice—toward decolonization as the only viable solution.”
—Nick Estes, assistant professor, University of New Mexico, and author of Our History Is the Future

“As Long as Grass Grows, in the way no other study has done, brilliantly connects historic and ongoing Native American resistance to US colonialism with the movement for environmental justice. This book helps teach us the central importance of Native theory and practice to transforming the radically imbalanced world that corporate capitalism has made into a world of balance through extended kinship with the social and natural environments on which human beings are dependent for life.”
—Eric Cheyfitz, professor, Cornell University, and author of The Disinformation Age: The Collapse of Liberal Democracy in the United States

“This groundbreaking new book will ignite conversations about environmentalism and environmental justice. Dina Gilio-Whitaker’s beautifully written account of environmental politics compels readers to understand how Indigenous people and the nonhuman world are caught in the gears of settler colonialism—and how an indigenized environmental justice framework can powerfully reframe our debate and our relations to one another and to the natural world around us. As Long as Grass Grows is perfectly timed to offer a fresh and captivating take on some of our most urgent issues of environmental and social justice.”
—Traci Voyles, author of Wastelanding: Legacies of Uranium Mining in Navajo Country