Everything Under the Heavens: How the Past Helps Shape China's Push for Global Power (Paperback) 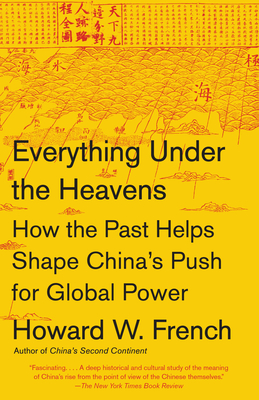 For many years after its reform and opening in 1978, China maintained an attitude of false modesty about its ambitions. That façade, reports former New York Times Asia correspondent Howard French, has now been cast off. China is increasingly asserting its place among the global powers, signaling its plans for pan-Asian dominance by building its navy, increasing territorial claims to areas like the South China Sea, and diplomatically bullying smaller players. Underlying this attitude is the millennia-old concept of tian xia, which held that everything “under the heavens” fell within the influence of the Chinese empire.

If we understand how this historical identity continues to color current actions, in ways ideological, philosophical, and even legal, we can learn to forecast just what kind of global power China stands to become—as the world order is poised to shift. Steeped in deeply researched history and on-the-ground reporting, this is French at his revelatory best.

With a New Afterword

Howard W. French wrote from Africa for The Washington Post and at The New York Times was bureau chief in Central America and the Caribbean, West and Central Africa, Japan, and China. He is the recipient of two Overseas Press Club awards and a two-time Pulitzer Prize nominee. He is the author of A Continent for the Taking: The Tragedy and Hope of Africa and China's Second Continent: How a Million Migrants Are Building a New Empire in Africa; he has written for The Atlantic, The New York Review of Books, The New York Times Magazine, and Rolling Stone, among other national publications. He is on the faculty of the Columbia University Graduate School of Journalism.

“Fascinating. . . . A deep historical and cultural study of the meaning of China’s rise from the point of view of the Chinese themselves.” —The New York Times Book Review

“French knows the country well . . . . He stresses a political history that helps illuminate territorial conflicts between China and its neighbors.” —The New Yorker

“It is difficult to imagine a better guide than Howard French's Everything Under the Heavens. . . . This book is an outstanding font of knowledge and provides compelling insights into how China sees the world and its own destiny.” —Forbes

“[An] expert study into the roots of [China’s] geopolitical ambitions . . . One of the most lucid and illuminating books on China’s conception of power and of its place in the world. . . . Fascinating.” —The Times Literary Supplement (London)

“French makes it clear China’s sense of national superiority is of more than historical significance. . . . Chilling.” —The Globe and Mail (Toronto)

“The best account we currently have of the cultural and historical influences on China’s 21st century aspirations. . . . The scale of 21st-century Chinese ambition, and its determination not to be simply absorbed into the Western liberal order, become powerfully evident.” —Asian Review of Books

“A valuable resource for the continuity in the Chinese approach over time that it lays bare. . . . French has curated a history of China’s foreign relations by the light of which current events can be read.” —Japan Times

“Fascinating. . . . French combines wide scholarship with the instinct of a dogged reporter. . . . Examines China’s interaction with the outside world, and how its emergence from a period of devastating humiliation by the West will change the world order.” —The Irish Times

“The most persuasive account I’ve ever read of how China's history shapes its foreign policy and that of its neighbors today. . . . Subtle and beautifully written. . . . Strongly recommended for policy makers and citizens alike.” —Susan Shirk, chair of the 21st Century China Center, University of California-San Diego

“Howard French very lucidly lays out a guide to thinking about the next stage in China's evolution, and the positive signs and danger signals to be watching for.” —James Fallows, author of China Airborne

“A wonderfully well-researched and elegantly written book about what we might call China’s ‘shape memory.’ If you’re wondering why this singular country acts as it does, this volume will go a long way to explaining it.” —Orville Schell, Arthur Ross Director, Center on US-Relations, Asia Society