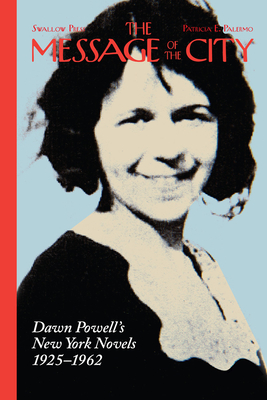 Dawn Powell was a gifted satirist who moved in the same circles as Dorothy Parker, Ernest Hemingway, renowned editor Maxwell Perkins, and other midcentury New York luminaries. Her many novels are typically divided into two groups: those dealing with her native Ohio and those set in New York. “From the moment she left behind her harsh upbringing in Mount Gilead, Ohio, and arrived in Manhattan, in 1918, she dove into city life with an outlander’s anthropological zeal,” reads a recent New Yorker piece about Powell, and it is those New York novels that built her reputation for scouring wit and social observation.

In this critical biography and study of the New York novels, Patricia Palermo reminds us how Powell earned a place in the national literary establishment and East Coast social scene. Though Powell’s prolific output has been out of print for most of the past few decades, a revival is under way: the Library of America, touting her as a “rediscovered American comic genius,” released her collected novels, and in 2015 she was posthumously inducted into the New York State Writer’s Hall of Fame.

Engaging and erudite, The Message of the City fills a major gap in in the story of a long-overlooked literary great. Palermo places Powell in cultural and historical context and, drawing on her diaries, reveals the real-life inspirations for some of her most delicious satire.

Patricia E. Palermo is a Southern California native, professor of English, and independent scholar who has lived in the New York City area for more than twenty years.

“Palermo understands Powell’s mixture of wit and pain, knows the books by heart, has the scholarship down pat, and has written it up in an intelligent and lyrical manner. A smart, affectionate, and never blinkered study of one of America’s great authors.”—Tim Page, author of Dawn Powell: A Biography

“The Message of the City is a solid, thoughtful piece of work. Palermo’s familiarity with Dawn Powell’s own writings and with the secondary literature on her life is comprehensive, and she’s integrated her analyses of fact and fiction with exceptional skill. Anyone who reads the book will come away with a clear understanding of why Powell’s New York novels are of continuing interest, both as works of satire and as sharp-eyed fictionalized portraits of her life and times.”—Terry Teachout, drama critic, Wall Street Journal

“Palermo’s The Message of the City will give Powell fans fresh insights into the woman, her life, and her work. The book will stimulate renewed interest in Powell and garner new fans for the all to often overlooked writer and humorist.”—Rocco Staino, director, Empire State Center for the Book

“[Powell] wrote with the kind of highly attuned, neurotic, slashing wit that others in the business love—she struck out at her craft, her contemporaries, and her own ambitions, and she aimed for the heart.”—New Yorker