Our Lady of the Rock: Vision and Pilgrimage in the Mojave Desert (Paperback) 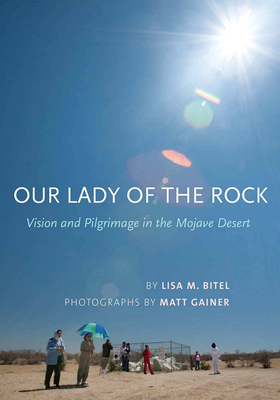 For more than twenty years, Maria Paula Acu a has claimed to see the Virgin Mary, once a month, at a place called Our Lady of the Rock in the Mojave Desert of California. Hundreds of men, women, and children follow her into the desert to watch her see what they cannot. While she sees and speaks with the Virgin, onlookers search the skies for signs from heaven, snapping photographs of the sun and sky. Not all of them are convinced that Maria Paula can see the Virgin, yet at each vision event they watch for subtle clues to Mary's presence, such as the unexpected scent of roses or a cloud in the shape of an angel. The visionary depends on her audience to witness and authenticate her visions, while observers rely on Maria Paula and the Virgin to create a sacred space and moment where they, too, can experience firsthand one of the oldest and most fundamental promises of Christianity: direct contact with the divine. Together, visionary and witnesses negotiate and enact their monthly liturgy of revelations.

Our Lady of the Rock, which features text by Lisa M. Bitel and more than sixty photographs by Matt Gainer, shows readers what happens in the Mojave Desert each month and tells us how two thousand years of Christian revelatory tradition prepared Maria Paula and her followers to meet in the desert. Based on six years of observation and interviews, chapters analyze the rituals, iconographies, and physical environment of Our Lady of the Rock. Bitel and Gainer also provide vivid portraits of the pilgrims--who they are, where they come from, and how they practice the traditional Christian discernment of spirits and visions.

Our Lady of the Rock follows three pilgrims as they return home with relics and proofs of visions where, out of Maria Paula's sight, they too have learned to see the Virgin. The book also documents the public response from the Catholic Church and popular news media to Maria Paula and other contemporary visionaries. Throughout, Our Lady of the Rock locates Maria Paula and her followers in the context of recent demographic and cultural shifts in the American Southwest, the astonishing increase in reported apparitions and miracles from around the world, the latest developments in communications and visual technologies, and the never-ending debate among academics, faith leaders, scientists, and citizen observers about sight, perception, reason, and belief.

Lisa M. Bitel is Professor of History and Religion at the University of Southern California. She is the author of Land of Women and Isle of the Saints, both from Cornell, as well as Landscape with Two Saints and Women in Early Medieval Europe, 400-1100. Matt Gainer is a documentary photographer whose work explores social and political movements, religious identity and community, and tensions between people and the environments they occupy. His work has been exhibited in North America and Europe at the Brukenthal National Museum, the Museo D'Arte Contemporanea Roma, the El Paso Museum of Art, and the Museo de Arte de Ciudad Juarez.