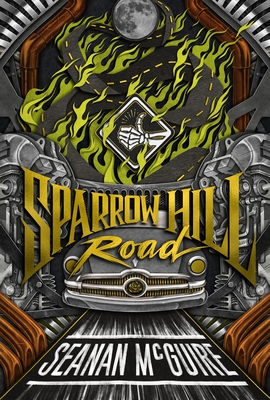 This is book number 1 in the Ghost Roads series.

Now in a new redesigned edition, featuring an updated introduction from the author and songs!

Rose Marshall died in 1952 in Buckley Township, Michigan, run off the road by a man named Bobby Cross—a man who had sold his soul to live forever, and intended to use her death to pay the price of his immortality. Trouble was, he didn’t ask Rose what she thought of the idea.

They have names for her all over the country: the Girl in the Diner. The Phantom Prom Date. The Girl in the Green Silk Gown. Mostly she just goes by “Rose,” a hitchhiking ghost girl with her thumb out and her eyes fixed on the horizon, trying to outrace a man who never sleeps, never stops, and never gives up on the idea of claiming what’s his. She’s the angel of the overpass, she’s the darling of the truck stops, and she’s going to figure out a way to win her freedom. After all, it’s not like it can kill her.

Seanan McGuire lives and works in Washington State, where she shares her somewhat idiosyncratic home with her collection of books, creepy dolls, and enormous blue cats.  When not writing--which is fairly rare--she enjoys travel, and can regularly be found any place where there are cornfields, haunted houses, or frogs.  A Campbell, Hugo, and Nebula Award-winning author, Seanan's first book (Rosemary and Rue, the beginning of the October Daye series) was released in 2009, with more than twenty books across various series following since.  Seanan doesn't sleep much.

You can visit her at www.seananmcguire.com.

Praise for the Ghost Roads series

"Hitchhiking ghosts, the unquiet dead, the gods of the old American roads—McGuire enters the company of Lindskold and Gaiman with this book, creating a wistful, funny, fascinating new mythology of diners, corn fields, and proms in this all-in-one-sitting read!" —Tamora Pierce, #1 New York Times bestelling author

"Seanan McGuire doesn't write stories, she gifts us with Myth—new Myths for a layered America that guide us off the twilight roads and lend us a pretty little dead girl to show us the way home." —Tanya Huff, author of the Blood books

"This stunning, richly imagined story of love and destiny features an irresistible heroine and is one of the accomplished McGuire's best yet." —Publishers Weekly

"The author takes a deliberately lyrical tone with this series, making the story feel like a folk song. She has a gift for putting her heroines in danger and finding creative ways to return them to see them out of it." —Library Journal

"The first volume of McGuire's Ghost Stories is an evocative and profoundly creative work that instantly wraps around readers' imaginations.... This emotional, consistently surprising collection of adventures is also a striking testament to the power of American myths and memories." —RT Reviews (top pick)

"If you've read any of McGuire's previous books, then you'll know she has a penchant for wit and humor; it's on display here as well. As with the myths she uses to create the world, it's all blended together quite impressively." —Culturess