The Girl in the Green Silk Gown (Ghost Roads #2) (Paperback) 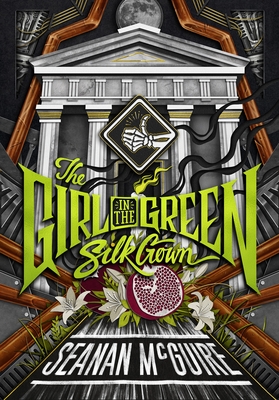 This is book number 2 in the Ghost Roads series.

The second book in the Ghost Roads series returns to the highways of America, where hitchhiking ghost Rose Marshall continues her battle with her killer--the immortal Bobby Cross.

Once and twice and thrice around,
Put your heart into the ground.
Four and five and six tears shed,
Give your love unto the dead.
Seven shadows on the wall,
Eight have come to watch your fall:
One’s for the gargoyle, one’s for the grave,
And the last is for the one you’ll never save.

For Rose Marshall, death has long since become the only life she really knows.  She’s been sweet sixteen for more than sixty years, hitchhiking her way along the highways and byways of America, sometimes seen as an avenging angel, sometimes seen as a killer in her own right, but always Rose, the Phantom Prom Date, the Girl in the Green Silk Gown.

The man who killed her is still out there, thanks to a crossroads bargain that won’t let him die, and he’s looking for the one who got away.  When Bobby Cross comes back into the picture, there’s going to be hell to pay—possibly literally.

Rose has worked for decades to make a place for herself in the twilight.  Can she defend it, when Bobby Cross comes to take her down?  Can she find a way to navigate the worlds of the living and the dead, and make it home before her hitchhiker’s luck runs out?

There’s only one way to know for sure.

Nine will let you count the cost:
All you had and all you lost.
Ten is more than time can tell,
Cut the cord and ring the bell.
Count eleven, twelve, and then,
Thirteen takes you home again.
One’s for the shadow, one’s for the tree,
And the last is for the blessing of Persephone.

Seanan McGuire lives and works in Washington State, where she shares her somewhat idiosyncratic home with her collection of books, creepy dolls, and enormous blue cats.  When not writing--which is fairly rare--she enjoys travel, and can regularly be found any place where there are cornfields, haunted houses, or frogs.  A Campbell, Hugo, and Nebula Award-winning author, Seanan's first book (Rosemary and Rue, the beginning of the October Daye series) was released in 2009, with more than twenty books across various series following since.  Seanan doesn't sleep much.

You can visit her at www.seananmcguire.com.

Praise for the Ghost Roads series

"Hitchhiking ghosts, the unquiet dead, the gods of the old American roads—McGuire enters the company of Lindskold and Gaiman with this book, creating a wistful, funny, fascinating new mythology of diners, corn fields, and proms in this all-in-one-sitting read!" —Tamora Pierce, #1 New York Times bestelling author

"Seanan McGuire doesn't write stories, she gifts us with Myth—new Myths for a layered America that guide us off the twilight roads and lend us a pretty little dead girl to show us the way home." —Tanya Huff, author of the Blood books

"This stunning, richly imagined story of love and destiny features an irresistible heroine and is one of the accomplished McGuire's best yet." —Publishers Weekly

"The author takes a deliberately lyrical tone with this series, making the story feel like a folk song. She has a gift for putting her heroines in danger and finding creative ways to return them to see them out of it." —Library Journal

"The first volume of McGuire's Ghost Stories is an evocative and profoundly creative work that instantly wraps around readers' imaginations.... This emotional, consistently surprising collection of adventures is also a striking testament to the power of American myths and memories." —RT Reviews (top pick)

"If you've read any of McGuire's previous books, then you'll know she has a penchant for wit and humor; it's on display here as well. As with the myths she uses to create the world, it's all blended together quite impressively." —Culturess