Hostile Homelands: The New Alliance Between India and Israel (Paperback) 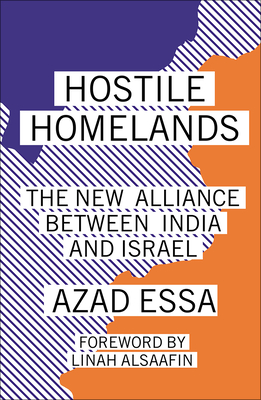 Lucid and persuasive, Essa demonstrates that the India-Israel alliance spells significant consequences for democracy, the rule of law, and justice worldwide.

Under Narendra Modi, India has changed dramatically. As the world attempts to grapple with its trajectory towards authoritarianism and 'Hindutva' (Hindu Nationalism), little attention has been paid to the linkages between Modi's India and the governments from which it has drawn inspiration, as well as military and technical support.

India once called Zionism racism, but, as Azad Essa argues, the state of Israel has increasingly become a cornerstone of India’s foreign policy. Looking to replicate the 'ethnic state' in the image of Israel in policy and practice, the annexation of Kashmir increasingly resembles Israel's settler-colonial project of the occupied West Bank. The ideological and political linkages between the two states are alarming; their brands of ethnonationalism are deeply intertwined.

Hostile Homelands puts India's relationship with Israel in its historical context, looking at the origins of Zionism and Hindutva; India’s changing position on Palestine; and the countries' growing military-industrial relationship from the 1990s.

Azad Essa is an award-winning journalist and author. He is currently a senior reporter for Middle East Eye based in New York. He previously worked at Al Jazeera English covering central and southern Africa. He is the author of The Moslems are Coming and Zuma's Bastard and has written for publications including the Washington Post, Foreign Policy and the Guardian.

Linah Alsaafin is a Palestinian journalist and writer whose work has appeared in OpenDemocracy, Al Monitor, Middle East Eye, the Times Literary Supplement, and Al Jazeera.