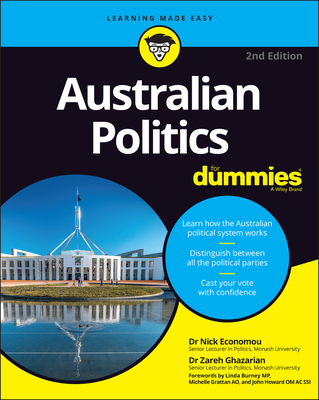 Australian Politics For Dummies gives you a helping hand as you get to grips with the good, the bad and the ugly of Australian politics. Seasoned political punters and voting novices alike will find fascinating facts and top thrills in in this essential guide. Master the ins and outs of elections, parties and policies. In no time, you'll be discussing and debating the biggest issues with ease. Down under, we all have to vote. It's one of the many beautiful things about this land of ours, and this book will help you learn why (and how) to cast that ballot.

This updated edition gives you everything you need to cast your vote with confidence. You'll identify what makes the Australian political system tick, distinguish between the different political parties and understand the influence of the media in Australian politics.

You want to know more about Australian politics, but, if we're being realistic, it's very complicated. Australian Politics For Dummies clears it all up.