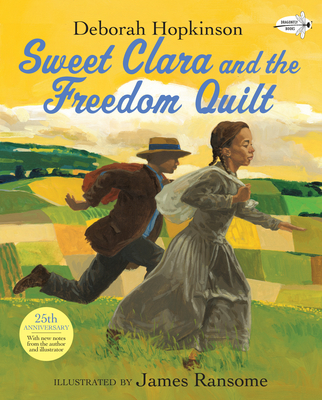 Clara, a slave and seamstress on Home Plantation, dreams of freedom—not just for herself, but for her family and friends. When she overhears a conversation about the Underground Railroad, she has a flash of inspiration. Using scraps of cloth from her work in the Big House and scraps of information gathered from other slaves, she fashions a map that the master would never even recognize. . . .

From the award-winning author-illustrator team of Deborah Hopkinson and James Ransome, this fictional tale of the Underground Railroad continues to inspire young readers 25 years after its original publication.

"A triumph of the human spirit." —Publishers Weekly, starred review

Deborah Hopkinson has written many acclaimed picture books, including A Letter to My Teacher; Sky Boys: How They Built the Empire State Building, a Boston Globe–Horn Book Honor Book; and Abe Lincoln Crosses a Creek: A Tall, Thin Tale, an ALA-ALSC Notable Children’s Book. She lives in Oregon with her family. Visit her at deborahhopkinson.com.

James Ransome is the illustrator of many award-winning titles for children, including The Creation by James Weldon Johnson, which won a Coretta Scott King Award for illustration, and Let My People Go: Bible Stories Told by a Freeman of Color by Patricia and Fredrick McKissack, winner of an NAACP Image Award. His other titles include This Is the Rope: A Story from the Great Migration by National Book Award winner Jacqueline Woodson, Young Pelé: Soccer's First Star by Lesa Cline-Ransome, and Sky Boys: How They Built the Empire State Building by Deborah Hopkinson. He lives in New York. Visit him at jamesransome.com.

"A particularly effective way to introduce the subject to younger children, adding a trenchant immediacy to their understanding of a difficult but important chapter in the country's past."--(starred) Horn Book.

"This first-rate book is a triumph of the heart."--(starred) Publishers Weekly.