America in 1492: The World of the Indian Peoples Before the Arrival of Columbus (Paperback) 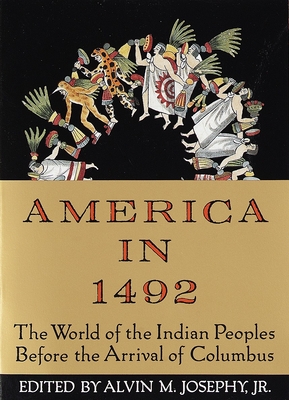 By Alvin M. Josephy
Likely Out of Print, but possibly available from the Publisher. Call for more info

When Columbus landed in 1492, the New World was far from being a vast expanse of empty wilderness: it was home to some seventy-five million people. They ranged from the Arctic to Tierra del Fuego, spoke as many as two thousand different languages, and lived in groups that varied from small bands of hunter-gatherers to the sophisticated and dazzling empires of the Incas and Aztecs. This brilliantly detailed and documented volume brings together essays by fifteen leading scholars field to present a comprehensive and richly evocative portrait of Native American life on the eve of Columbus's first landfall.

Developed at the D'Arcy McNickle Center for the History of the American Indian and edited by award-winning author Alvin M. Josehpy, Jr., America in 1492 is an invaluable work that combines the insights of historians, anthropologists, and students of art, religion, and folklore. Its dozens of illustrations, drawn from largely from the rare books and manuscripts housed at the Newberry Library, open a window on worlds flourished in the Americas five hundred years ago.

Alvin M. Josephy, Jr., a leading historian of the American West, was the author of many award-winning books, including The Patriot Chiefs, The Indian Heritage of America, Now That the Buffalo's Gone, The Civil War in the American West, 500 Nations, and A Walk Toward Oregon. He was a vice president and editor of American Heritage magazine, the founding chairman of the board of trustees of the Smithsonian's National Museum of the American Indian, and president of the Western History Association. Josephy died in the fall of 2005.

"A teeming panorama of North and South American life from prehistoric times through the 15th century .... A book like [this]needs no recommendation beyond its accuracy, comprehensiveness, and serious of purpose." -- Cleveland Plain Dealer

"America in 1492 totally shatters the pious fiction that there was no civilization here before the arrival of Columbus." -- Dee Brown