Why We ACT: Turning Bystanders Into Moral Rebels (Hardcover) 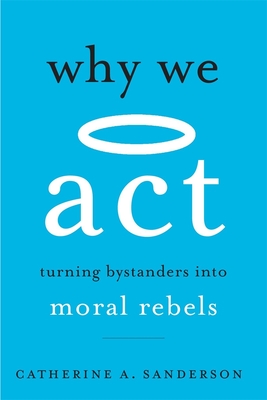 "From bullying on the playground to sexual harassment in the workplace, perfectly nice people often do perfectly awful things. But why? In this thoughtful and beautifully written book, Sanderson shows how basic principles of social psychology explain such behavior--and how they can be used to change it. A smart and practical guide to becoming a better and braver version of ourselves."
--Daniel Gilbert, author of Stumbling on Happiness


Why do good people so often do nothing when a seemingly small action could make a big difference? A pioneering social psychologist explains why moral courage is so rare--and reveals how it can be triggered or trained. We are bombarded every day by reports of bad behavior, from sexual harassment to political corruption and bullying belligerence. It's tempting to blame evil acts on evil people, but that leaves the rest us off the hook. Silence, after all, can perpetuate cruelty. Why We Act draws on the latest developments in psychology and neuroscience to tackle an urgent question: Why do so many of us fail to intervene when we're needed--and what would it take to make us step up? A renowned psychologist who has done pioneering research on social norms, Catherine Sanderson was inspired to write this book when a freshman in her son's dorm died twenty hours after a bad fall while drinking. There were many points along the way when a decision to seek help could have saved his life. Why did no one act sooner? Cutting-edge neuroscience offers part of the answer, showing how deviating from the group activates the same receptors in the brain that are triggered by pain. But Sanderson also points to many ways in which our faulty assumptions about what other people are thinking can paralyze us. And she shares surprisingly effective and simple strategies for resisting the pressure to conform. Moral courage, it turns out, is not innate. Small details and the right training can make a big difference. Inspiring and potentially life transforming, Why We Act reveals that while the urge to do nothing is deeply ingrained, even the most hesitant would-be bystander can learn to be a moral rebel.