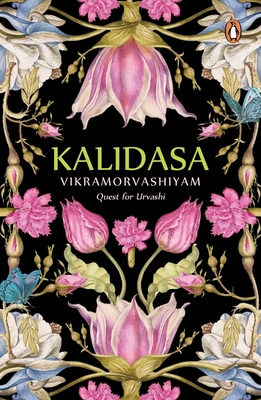 The earthly King Pururavas rescues the celestial nymph Urvashi from a demon, and thus begins a majestic love story that brings heaven and earth together. Both are struck with Kama's arrow in their very first meeting, but each shies away from saying anything because the distance between them seems insurmountable. Even when they do confess their love, magical transformations and heavenly curses keep the lovers apart. Will Pururavas succeed in his quest for Urvashi?

A magnificent drama based on an episode from the Rig Veda, Vikramorvashiyam is filled with dramatic turns of event, music, and dance. The scenes, characters, and dialogues are at once lively and theatrical as well as sensitive and speculative. Believed to be the second of Kalidasa's three plays, Vikramorvashiyam is an undisputed classic from ancient Indian literature. A.N.D. Haksar's brilliant new translation gives contemporary readers an opportunity to savor this delightful tale.

Kalidasa, perhaps the most extraordinary of India's classical poets, composed seven major works: three plays, two epic poems, and two lyric poems. According to legend, he lived at the end of the fourth century, and was one of the 'nine jewels' in the court of the Gupta king Chandragupta II. Although very little is known about his life, Kalidasa's popularity has endured for centuries.

A.N.D. Haksar is a well-known translator of Sanskrit classics. A long-time career diplomat, he served as the Indian high commissioner in Kenya and the Seychelles, minister in the United States, and ambassador in Portugal and Yugoslavia. His translations from the Sanskrit include Hitopadesa, SimhasanaDvatrimsika, Subhashitavali, Kama Sutra, The Courtesan's Keeper, The Seduction of Shiva, Suleiman Charitra, Raghuvamsam, and Three Hundred Verses, all published in Penguin Classics.