Bury me in Valletta (Paperback) 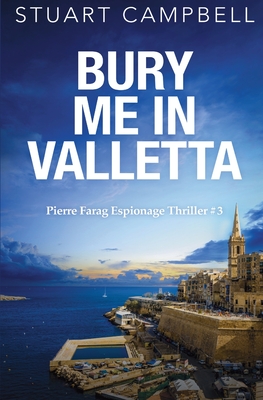 By Stuart Campbell
$14.00
Available from our Distributors - Usually arrives in-store in 2-7 days
(This book cannot be returned.)

Bury me in Valletta, a stand-alone sequel to Cairo Mon Amour, brings back Pierre Farag and his ex-movie star wife Zouzou Paris in another sizzling spy thriller.London, 1975. Student Emma Stonehouse is about to prove she's got the guts to be a serious political activist. But her dad Ralph, a senior intelligence bureaucrat in Whitehall, has a dirty little secret. When Emma makes her move, Ralph's career implodes and a clandestine espionage operation is thrown into peril. Egyptian-Armenian exile Pierre Farag is hired to salvage the operation, taking on the role of an enigmatic arms dealer to penetrate Colonel Gaddafi's stronghold.Inspired by the real-life story of arms smuggling from Libya to the Provisional IRA in the seventies, Bury me in Valletta has enough quirky twists to delight readers of Kate Quinn, Philip Kerr, and Lara Prescott.