The Climate Book: The Facts and the Solutions (Hardcover) 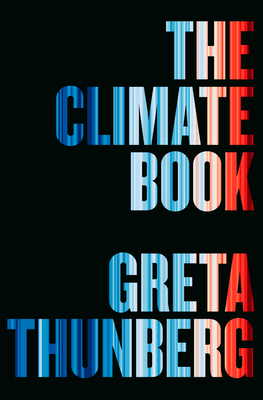 We still have time to change the world. From Greta Thunberg, the world's leading climate activist, comes the essential handbook for making it happen.

You might think it's an impossible task: secure a safe future for life on Earth, at a scale and speed never seen, against all the odds. There is hope - but only if we listen to the science before it's too late.

In The Climate Book, Greta Thunberg has gathered the wisdom of over one hundred experts - geophysicists, oceanographers and meteorologists; engineers, economists and mathematicians; historians, philosophers and indigenous leaders - to equip us all with the knowledge we need to combat climate disaster. Throughout, illuminating and often shocking grayscale charts, graphs, diagrams, photographs, and illustrations underscore their research and their arguments. Alongside them, she shares her own stories of demonstrating and uncovering greenwashing around the world, revealing how much we have been kept in the dark. This is one of our biggest challenges, she shows, but also our greatest source of hope. Once we are given the full picture, how can we not act? And if a schoolchild's strike could ignite a global protest, what could we do collectively if we tried?

We are alive at the most decisive time in the history of humanity. Together, we can do the seemingly impossible. But it has to be us, and it has to be now.

Greta Thunberg was born in 2003. In August 2018, she started a school strike for the climate outside the Swedish Parliament that has since spread all over the world. She is an activist in Fridays for Future and has spoken at climate rallies across the globe, as well as at the World Economic Forum in Davos, the US Congress, and the United Nations.

“Impassioned . . . Thunberg gathers essays from scientists, journalists, and activists, starting with lucid and accessible explanations of the science of global warming and its possible effects . . . A comprehensive and articulate shock to the system.” —Publishers Weekly

“An urgent collection of writing by leaders in the fields of science, engineering, history, philosophy, and activism . . . Brilliant and alarming . . . Vital reading for anyone who cares about the planet.” —Kirkus (starred review)

“[A] sweeping compendium of essays contributed by more than 100 academicians, authors, environmentalists, and journalists whose specific professional expertise or profound humanitarian concern amplifies the existing science surrounding this crisis of sustainability and ecology. Yet among this esteemed roster of recognized voices, it is Thunberg’s own eloquence that elevates the collection with introductory essays for each section that convey a sense of urgency that is genuine, grounded, and unimpeachable.” —Booklist (starred review)