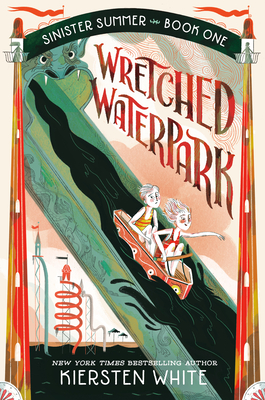 This is book number 1 in the The Sinister Summer Series series.

A middle-grade mystery series that's spooky, creepy, and filled with gothic twists! Meet the Sinister-Winterbottom twins, who solve mysteries at increasingly bizarre summer vacation destinations in the hopes of being reunited with their parents—or at the very least finally finding a good churro.

“An absolute delight. If I have to die in a waterpark, I want to die in this one.”—Holly Black, #1 New York Times bestselling author of The Cruel Prince

"Wickedly weird. . . . Will appeal to anyone who loved A Series of Unfortunate Events." —The New York Times

Meet the Sinister-Winterbottoms: brave Theo, her timid twin, Alexander, and their older sister, Wil. They’re stuck for the summer with their Aunt Saffronia, who doesn’t know how often children need to eat and can’t use a smartphone, and whose feet never quite seem to touch the floor when she glides—er—walks.

When Aunt Saffronia suggests a week pass to the Fathoms of Fun Waterpark, they hastily agree. But the park is even stranger than Aunt Saffronia. The waterslides look like gray gargoyle tongues. The employees wear creepy black dresses and deliver ominous messages. An impossible figure is at the top of the slide tower, people are disappearing, and suspicious goo is seeping into the wave pool.

Kiersten White has never been a lifeguard, camp counselor, or spa masseuse, but she is the New York Times bestselling author of more than twenty books, including Wretched Waterpark, the first book in the Sinister Summer series, and Beanstalker and Other Hilarious Scarytales. She lives with her family near the beach and keeps all her secrets safely buried in her backyard, where they are guarded by a ferocious tortoise named Kimberly.

“Like a big waterslide that you scream all the way down, only to laugh in relief and get right back on, this book is gothically hilarious and an absolute delight. If I have to die in a waterpark, I want to die in this one.”--Holly Black, #1 NYT-bestselling author of The Folk of the Air series

"If you like stories about mostly perfectly nice children in imperfectly spooky situations, you’ll adore Kiersten White’s Wretched Waterpark! It's both give-you-the-chills-creepy and laugh-in-a-room-by-yourself-funny. Full of heart and bravery and the most wonderful weirdness."--Lora Senf, author of The Clackity

"A timeless and charming romp of mysterious gothic delight for fans of Neil Gaiman, The Mysterious Benedict Society, and Hotel Transylvania. I want to live in this world!"--Delilah S. Dawson, NYT bestselling author of the Minecraft Mob Squad series and Mine

"Everything I want in a creepy middle grade book: wonderfully odd characters, mystery and humor, a murderous gothic waterpark. Dangerously delightful.”--Jacqueline West, NYT-bestselling author of The Books of Elsewhere and Long Lost

"The creepy gothic setting, the relationships between the siblings, the cast of unusual characters, and the teasers that this episode is just one part of a much larger puzzle will keep readers hooked. Young goths will be all-in for the trippy mysteries."--Kirkus Reviews

"Packed with wordplay and mock-gothic mystery, this first title in the Sinister Summer series is perfect for fans of Lemony Snicket, Edward Gorey and Roald Dahl."--Shelf Awareness

"Readers who enjoy quirky mysteries will fall in love with the clever and relatable Sinister-Winterbottom twins, who will solve the mystery before their aunt shuffles them off to their next adventure."--Booklist