Union: The Struggle to Forge the Story of United States Nationhood (Hardcover) 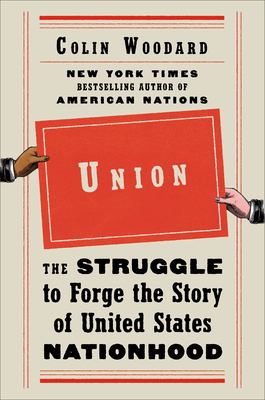 By Colin Woodard
$30.00
This title is likely Out of Print or otherwise unavailable

By the bestselling author of American Nations, the story of how the myth of U.S. national unity was created and fought over in the nineteenth century--a myth that continues to affect us today

Union tells the story of the struggle to create a national myth for the United States, one that could hold its rival regional cultures together and forge an American nationhood. On one hand, a small group of individuals--historians, political leaders, and novelists--fashioned and promoted the idea of America as nation that had a God-given mission to lead humanity toward freedom, equality, and self-government. But this emerging narrative was swiftly contested by another set of intellectuals and firebrands who argued that the United States was instead the homeland of the allegedly superior "Anglo-Saxon" race, upon whom divine and Darwinian favor shined.

Colin Woodard tells the story of the genesis and epic confrontations between these visions of our nation's path and purpose through the lives of the key figures who created them, a cast of characters whose personal quirks and virtues, gifts and demons shaped the destiny of millions.

Colin Woodard, a New York Times bestselling author and historian, is the state and national affairs writer at the Portland Press Herald, where he received a 2012 George Polk Award and was a finalist for the 2016 Pulitzer Prize for explanatory reporting. A longtime foreign correspondent for The Christian Science Monitor and the San Francisco Chronicle, he has reported from more than fifty foreign countries and six continents. His work has appeared in The New York Times, The Washington Post, The Economist, Smithsonian,Politico, and dozens of other publications. A graduate of Tufts University and the University of Chicago, he is the author of American Nations, American Character, The Lobster Coast, The Republic of Pirates, and Ocean's End. He lives in Maine.

"Woodard traces a gradual, emerging consensus of American unity. It’s a dark tale. This country purchased its sense of itself as a unified whole at a high price, he writes: that of racial equality. . . . In Woodard’s hands, [history] leaps to life. He shows just how powerful a form popular nonfiction can be in the hands of a disciplined writer who won’t tolerate generality or abstraction. . . . The writing is relentlessly accessible. . . . This is that rare history that tells what influential thinkers failed to think, what famous writers left unwritten. . . . Woodard demonstrates that something more complicated than reason is always afoot, some swirl of politics, events, and wordless popular sentiment that sweeps the hapless thinker in its wake."
—Jill Leovy, The American Scholar

"Compelling. . . . George Bancroft’s portrait is only one of many utterly gripping depictions scattered throughout Union. . . . The stakes are nothing short of determining how a nation thinks about itself, how it teaches posterity about itself. In Union, that battle sprawls out of the narrow confines of academia and embroils the entire country – and the fight is ongoing."
—The Christian Science Monitor

"Woodard succeeds in demonstrating the high stakes of master narratives, versions of the past that people choose as identities and stories in which they wish to live. . . . This book will help readers grasp the staying power and the consequences of the idea — ingrained in generations — that American history is essentially a chronicle of progress, a saga of liberty unfolding under some illusive pattern of exceptionalism and divine design. . . . Woodard does make visions of history into a kind of human drama. He writes with a storyteller’s pace and vividness."
—David Blight, The Washington Post

"A fascinating journey through history. . . . Union is timely and thought-provoking."
—BookPage

“Colin Woodard tells not the story of how America became a nation, but rather of how America crafted its own version of its national history, and how that national mythology has changed over the decades.”
—The Christian Science Monitor ("best nonfiction books of 2020")

"Overall, Woodard effectively shows how the country struggled to create a national myth, and an international image of unity. . . . Woodard is a gifted historiographer, and this excellent work will be appreciated by anyone interested in American history and how it came to be written."
—Library Journal (starred review)

"Ambitious and accessible. . . . This enlightening and character-driven account will resonate with progressive history buffs."
—Publishers Weekly

"Union is detailed and unflashy, and it contains many valuable historical lessons modern readers will find useful."
—Booklist

“Mr. Woodard’s approach is breezier than Mr. Fischer’s and more historical than Mr. Garreau’s, but [Woodard] has earned a place on the shelf between them."
—The Wall Street Journal

“One of the most original books I read in the last year was American Nations. . . . During my five years as an ambassador in the United States, I spent a lot of time studying the voting patterns of different states and reading American history, and I have to say I find Woodard’s thesis to be fully borne out by my own observations.”
—John Bruton, former European Union ambassador to the United States

"A eye opening experience for me. . . . Many Americans say they love their country. The question is -- which country are they talking about.”
—Chai Feldblum, former commissioner,  U.S. Equal Employment Opportunity Commission

“In a compelling mash-up of the contemporary political geography of authors like Joel Garreau and Dante Chinni with the ethnography and history of David Hackett Finscher (Albion’s Seed), [Colin] Woodard divides North America into eleven distinct “nations." . . . [A] fascinating new ethnographic history of North America.”
—Alec MacGillis, The New Republic

“American Nations pulls off the unlikely feat of both offering the tools for just such a broader, deeper understanding—and demonstrates why, in a larger sense, that effort is doomed….The key to the [American Nations]’s effectiveness is Woodard’s skill—and irreverence—in delving into history with no qualms about being both brisk and contrarian….[I]n offering us a way to better understand the forces at play in the rumpus room of current American politics, Colin Woodard has scored a true triumph. I am going to order copies for my father and sister immediately—and I hope Woodard gets a wide hearing for his fascinating study.”
—The Daily Beast

“In American Nations, [Colin Woodard] persuasively reshapes our understanding of how the American political entity came to be. . . . [A] fascinating new take on history.”
—The Christian Science Monitor

“Well-researched analysis with appeal to both casual and scholarly readers.”
—Library Journal

“Fascinating. . . . Engrossing. . . . In the end, though, [American Nations] is a smart read that feels particularly timely now, when so many would claim a mythically unified “Founding Fathers” as their political ancestors.”
—The Boston Globe

“Woodard persuasively argues that since the founding of the United States, eleven distinct geographical “nations” have formed within the Union, each with its own identity and set of values.”
—Military History Quarterly

"Woodard’s account of American history is a refreshing take, and one I’d recommend to those curious of what causes our cultural differences.”
—Montana Kaimin

“[C]ontroversial and thought-provoking. . . . This is an important sociological study.”
—Morning Sentinel