Between East and West: Across the Borderlands of Europe (Paperback) 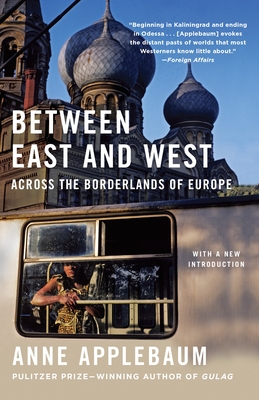 In the summer and fall of 1991, Anne Applebaum, Pulitzer Prize-winning author of Gulag and Iron Curtain, took a three month road trip through the freshly independent borderlands of Eastern Europe. She deftly weaves the harrowing history of the region and captures the effects of political upheaval on a personal level.

An extraordinary journey into the past and present of the lands east of Poland and west of Russia—an area defined throughout its history by colliding empires. Traveling from the former Soviet naval center of Kaliningrad on the Baltic to the Black Sea port of Odessa, Anne Applebaum encounters a rich range of competing cultures, religions, and national aspirations.

In reasserting their heritage, the inhabitants of the borderlands attempt to build a future grounded in their fractured ancestral legacies. In the process, neighbors unearth old conflicts, devote themselves to recovering lost culture, and piece together competing legends to create a new tradition. Rich in surprising encounters and vivid characters, Between East and West brilliantly illuminates the soul of the borderlands and the shaping power of the past.

Anne Applebaum is a columnist for The Washington Post and the author of several history books, including Gulag, which won the Pulitzer Prize for Nonfiction, and Iron Curtain, which was a National Book Award Finalist. She is a former visiting professor at the London School of Economics, a former member of The Washington Post editorial board, a former deputy editor of The Spectator magazine, and a former Warsaw correspondent of The Economist. Her essays appear in The New York Review of Books, The New Republic, Foreign Policy and Foreign Affairs.

Praise for Between East and West and Anne Applebaum

“In her relentless quest for understanding, Applebaum shines light into forgotten worlds of human hope, suffering and dignity.” —The Washington Post

“The interleaved surveys of the region’s history [are] sweeping and elegantly-written.” —The Independent (UK)

“Applebaum's receptiveness encourages borderlanders to tell her the myriad of ways that political partitioning has subjugated their personal lives, cultural traditions and languages.” —Publishers Weekly

“Achieves both specificity and readability.” —The New York Times

“Ms. Applebaum offers us windows into the lives of the men and sometimes women who constructed the police states of Eastern Europe. She gives us a glimpse of those who resisted. But she also gives us a harrowing portrait of the rest—the majority of Eastern Europe's population, who, having been caught up in the continent's conflicts time and time again, now found themselves pawns in a global one.” —The Wall Street Journal

“Applebaum wants to give flesh to a concept.” —New Yorker

“She is a terrific writer, rare among regional experts. . . . Applebaum possesses an overarching vision of what occurred in Eastern Europe.” —Christian Science Monitor

“Her researches have led her radically to reappraise some of the most basic historical assumptions made in the West.” —Evening Standard (UK)

“Applebaum [has the] ability to take a dense and complex subject, replete with communist acronyms and impenetrable jargon, and make it not only informative but enjoyable—and even occasionally witty.” —The Telegraph (UK)