Areopagitica and Other Prose Works (Paperback) 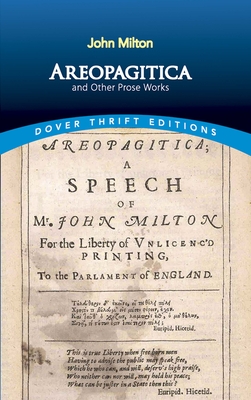 An uncompromising defender of liberty as well as a sublime poet, John Milton published the Areopagitica in 1644, at the height of the English Civil War. The impetus arose from Parliament's Licensing Order, which censored all printed materials and ultimately led to arrests, book burnings, and other authoritarian abuses. Milton's polemic, strengthened by biblical and classical allusions, remains enduringly significant and ranks among the world's most eloquent defenses of the right to free speech.
In addition to the Areopagitica, this collection of Milton's most significant prose works includes Of Education, a tract on educational reform; Meditation Upon Divine Justice and The Death of King Charles the First, a rationale for the overthrow of the monarchy; The Doctrine and Disciple of Divorce, in which the author urges the enactment of a virtually unheard-of reform allowing divorce for incompatibility and the right of remarriage; and Autobiographical Extracts, featuring highlights from Milton's memoirs.

One of the greatest of English poets, John Milton (1608-74) is best known for his immortal epic, Paradise Lost. A prolific pamphleteer and polemicist, he is also a giant in the history of political thought and philosophy who opposed state-sponsored religion and championed liberty of conscience.