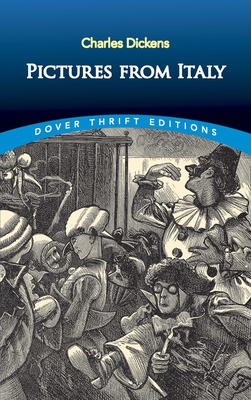 In 1844, Charles Dickens embarked on a year-long visit to Italy, where he turned his perceptive views of the human condition toward a thoughtful appraisal of the country's soul and character. Combining travelogue with social commentary, he formed a kaleidoscopic portrait of nineteenth-century Italian life as seen by an outsider. Rather than serving as a guidebook, his pictures from Italy entertain rather than instruct. Dickens' eye for detail and his abundant humor accent his comments on a country rich in art, character, and scenery.
Most of the book focuses on Italy's northern regions -- Tuscany, Milan, and Venice -- in addition to sojourns in Rome and Naples. Although appalled by scenes of abject poverty, much of which he attributed to oppression by the Catholic Church, Dickens was captivated by his encounters with lively street carnivals, curious customs, and vivacious individuals. His reflections offer not only the social observations characteristic of his novels, but also keen insights into the author's mind and personality.

After a childhood blighted by poverty, commercial success came early to Charles Dickens (1812-70). By the age of 24, he was an international sensation whose new novels were eagerly anticipated. Two centuries later, Dickens' popularity endures as readers revel in the warm humanity and rollicking humor of his tales of self-discovery.