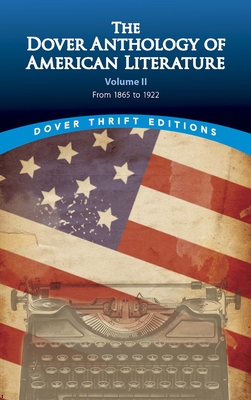 This is book number 2 in the Dover Thrift Editions series.

Absolutely wonderful; a marvelous journey which meanders through some of the most formative literature, non-fiction, and poetry to come out of the United States. -- The Literary Sisters
At the end of the Civil War, another long and arduous struggle began as the nation attempted to reunite. Literature offered a path toward solidarity, and this concise anthology surveys the writings of major American authors from the war's end to the dawn of the Jazz Age.
Featured works include those of Emily Dickinson, Wallace Stevens, William Carlos Williams, Robert Frost, Langston Hughes, and other poets. Mark Twain is prominently represented among the storytellers, along with Ambrose Bierce, Stephen Crane, and F. Scott Fitzgerald. Three short novels appear in their entirety: Daisy Miller by Henry James, The Call of the Wild by Jack London, and Ethan Frome by Edith Wharton. Speeches by Sitting Bull and Theodore Roosevelt, memoirs by Booker T. Washington and Helen Keller, and many other selections recapture a vibrant era in American literature. Informative introductory notes supplement the authoritative texts.

An English professor at the City University of New York's Kingsborough College, Bob Blaisdell is the editor of numerous Dover Thrift Editions and many other books. He has published essays about his own experiences as a teacher and regularly reviews books for the San Francisco Chronicle and the Christian Science Monitor.