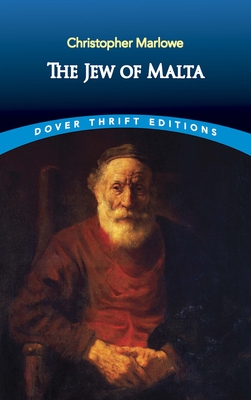 By Christopher Marlowe
$3.00
This title is likely Out of Print or otherwise unavailable

The spirit of Machiavelli presides over The Jew of Malta, in which the title character relentlessly plots to maintain and extend his political influence and wealth. A paragon of remorseless evil, Barabas befriends and betrays the Turkish invaders and native Maltese alike, incites a duel between the suitors for his daughter's hand, and takes lethal revenge upon a convent of nuns.
Both tragedy and farce, this masterpiece of Elizabethan theater reflects the social and political complexities of its age. Christopher Marlowe's dramatic hybrid resonates with racial tension, religious conflict, and political intrigue -- all of which abounded in 16th-century England. The playwright, who infused each one of his plays with cynical humor and a dark world view, draws upon stereotypes of Muslim and Christian as well as Jewish characters to cast an ironic perspective on all religious beliefs.
The immediate success of The Jew of Malta on the Elizabethan stage is presumed to have influenced Marlowe's colleague, William Shakespeare, to draw upon the same source material for The Merchant of Venice. The character of Barabas is the prototype for the well-known Shylock, and this drama of his villainy remains a satirical gem in its own right.