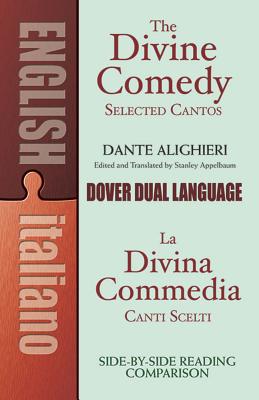 On Our Shelves Now
(This book cannot be returned.)

Begun about 1307 and completed in 1321, Dante's sublime poetic masterpiece, The Divine Comedy, is one of the world's great works of literature. It comprises an extraordinarily vivid and imaginative account of the poet's allegorical journey through the afterlife. Complementing its depiction of the world beyond, the poem's abundant allusions to earthly history and politics, vivid portrayals of Dante's friends and enemies, and many references to contemporary Italian affairs make it an intensely human, realistic portrait of life on earth.
Led in his travels by the classical poet Virgil, Dante descends through the nine circles of Hell, where punishment is determined by the gravity of the sinner's transgressions. He then ascends the mountain of Purgatory, encountering souls atoning for their misdeeds, and, at the summit, is met at the entrance to Paradise by Beatrice, his beloved. Throughout his pilgrimage, he meets characters drawn from ancient Roman and medieval times (philosophers, heroes, emperors, popes, and politicians, among others) as well as numerous personalities from the Italy of his day.
This dual-language edition includes the complete texts of 33 of the original 100 cantos or "songs"; each omitted canto is summarized in its proper place to provide continuity. The selection of cantos and the excellent line-for-line translations from Italian into English are by Stanley Appelbaum, who also has provided an informative Introduction and useful notes.

Stanley Appelbaum served for decades as Dover's Editor in Chief until his retirement in 1996. He continues to work as a selector, compiler, editor, and translator of literature in a remarkable range of languages that includes Spanish, Italian, French, German, and Russian.