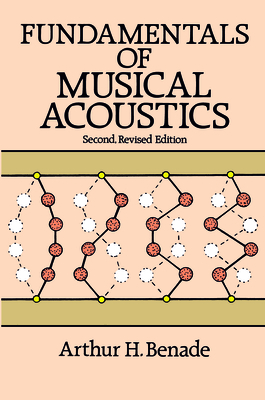 Fundamentals of Musical Acoustics is a landmark book in its field, hailed for its astonishingly clear, delightfully readable statement of everything of acoustical importance to music-making. Though directed primarily to the music student who is taking an acoustics course, it is essential reading for all musicians, music lovers, and audiophiles eager to expand their musical horizons.
The book deals extensively with the fundamental modes of sound production and with the special sound-producing properties of the musical instruments in common use today -- keyboard, string, brass, woodwind, and percussion -- as well as the human voice. It further explores the critical roles played by the room and by the hearer's auditory apparatus. The basis of scales and harmony and the craft of instrument makers are also discussed in this masterly text, which includes numerous illustrations, bibliographical information, and a stimulating section of Examples, Experiments, and Questions at the end of each chapter. After the original publication of this book, Dr. Benade maintained a detailed set of corrections and revisions that have been incorporated into this second, revised edition.
Comprehensive . . . rigorous . . . well-organized . . . will surely be the text of choice. -- American Scientist
A remarkable achievement . . . a book on musical acoustics by an acknowledged master of the subject which guides the reader through all the most subtle intricacies of every important family of Western musical instruments with virtually no mathematics . . . Arthur Benade, a professor at Case Western Reserve, has set forth a vast knowledge of musical acoustics so clearly that you can read his book as you would a novel. -- The Audio Amateur
Every chapter contains material not previously covered in books written on musical acoustics. -- John T. Scott, Physics Today
Recommended for music lovers and audiophiles who want to know more about the physics of musical sounds. -- Stereo Review

The Science of Sound Arthur H. Benade developed his interest in the acoustics of musical instruments growing up in Lahore (British India, now Pakistan) where his father was an educator. His interest in acoustics continued to grow as he earned a PhD in Physics at Washington University in St. Louis and joined the faculty of Case Institute of Technology, now Case Western Reserve University in Cleveland, Ohio, as a nuclear physicist. The turning point came when the Physical Science Study Committee commissioned him to write the influential concise text, Horns, Strings and Harmony, which Anchor Books launched as a mass market-sized paperback in 1960 and which Dover reprinted in 1992. Known to have inspired generations of teachers, this clear and thoughtful study has sold more than 150,000 copies in all editions and has been translated into several languages. In the decade following the appearance of Horns, Strings and Harmony, Benade completed his more extensive text, Fundamentals of Musical Acoustics, first published by Oxford University Press in 1976 and reprinted by Dover in 1996.In addition to his two books, Benade wrote more than 100 technical papers, contributed to many symposia, and lectured on acoustics all over the world. His range was far-reaching. Titles of his scholarly papers include Mathematical Theory of Woodwind Finger Holes, Resonance-Absorption Cross Section of a Pipe Organ, and Spherical-Wave Approximation in Horns: Measured and Calculated. Arthur Benade died in 1988 at the age of 62, one of the twentieth century's seminal figures in the world of acoustical research.