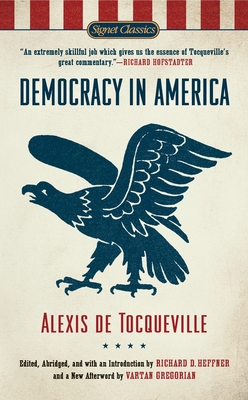 Over 175 years ago, Alexis de Tocqueville, an astute political scientist, came to the United States to evaluate the meaning and actual functioning of democracy. Here, Tocqueville discusses the advantages and dangers of majority rule—which he thought could be as tyrannical as the rule of a monarchy. He analyzes the influence of political parties and the press on the government and the effect of equality on the social, political, and economic life of the American people. He also offers some startling predictions about world politics, which history has borne out. So brilliant and penetrating are his comments and criticisms, they have vital meaning today for all who are interested in democracy.

Abridged and with an Introduction by Richard D. Heffner
and an Afterword by Vartan Gregorian

Alexis de Tocqueville was born in 1805 to a noble French family that had survived the French Revolution. His father gained some political power under the reign of the Bourbons, and after the July Revolution of 1830, the family was exiled along with the king. Tocqueville, then twenty-five years old, stayed in France, swearing allegiance to the new government. Shortly thereafter he and a friend, Gustave de Beaumont, sought and received a government assignment to study the prison system of the United States. They arrived in America in 1831. After extensive travels across the young nation, Tocqueville wrote Democracy in America (published in two volumes in 1835 and 1840). The publication of the first volume made Tocqueville a well-known figure, but he led a quiet life, accepting modest governmental posts, traveling around Europe, and marrying an Englishwoman. In 1848, Tocqueville once again rose to political prominence after a prescient speech that foretold of revolution. After serving through the massive upheavals and overthrows of government, Tocqueville retired from political life in 1849. Always weak in health, his lung disease grew progressively worse from that period on. Moving south several times on doctor’s recommendations, Tocqueville succumbed to death in Cannes in 1859.

Richard D. Heffner received his A.B. and M.A. from Columbia University and has taught history and political science at the University of California, Sarah Lawrence College, and the New School for Social Research. He has been University Professor of Communications and Public Policy at Rutgers since 1964. Mr. Heffner also produces and moderates his prize-winning weekly public television series, The Open Mind, and for twenty years was Chairman of the motion picture industry’s film rating system. In addition to Democracy in America, Mr. Heffner is the editor of the Mentor book A Documentary History of the United States.

Vartan Gregorian is the twelfth president of Carnegie Corporation of New York.  Prior to his current position, Gregorian served for nine years (1989-1997) as president of Brown University and for eight years (1981-1989) as President of the New York Public Library.  He became founding dean of the Faculty of Arts and Sciences at the University of Pennsylvania in 1974 and four years later became its twenty-third provost.  Gregorian, an historian, was a professor at San Francisco State University, UCLA, University of Texas at Austin, Penn, and Brown.

“No better study of a nation’s institutions and culture than Tocqueville’s Democracy in America has ever been written by a foreign observer.”—The New York Times

“An extremely skillful job which gives us the essence of Tocqueville’s great commentary.”—Richard Hofstadter