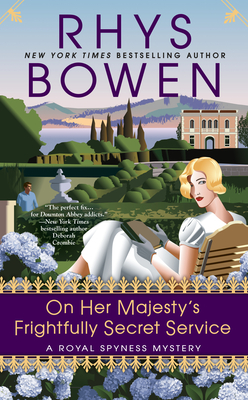 This is book number 11 in the A Royal Spyness Mystery series.

Lady Georgiana Rannoch juggles secret missions from the Queen, her beau, and her mother in this mystery in the Royal Spyness series.

When royal sleuth Georgie Rannoch receives a letter from her dearest friend Belinda, who's in an Italian villa awaiting the birth of her illegitimate baby, she yearns to run to her side. If only she could find a way to get there! But then opportunity presents itself in a most unexpected way—her cousin the queen asks her to attend a house party in the Italian Lake Country. The Prince of Wales and the dreadful Mrs. Simpson have been invited, and Her Majesty is anxious to thwart a possible secret wedding.

What luck! A chance to see Belinda, even if it is under the guise of stopping unwanted nuptials. Only that's as far as Georgie's fortune takes her. She soon discovers that she attended finishing school with the hostess of the party—and the hatred they had for each other then has barely dimmed. Plus, she needs to hide Belinda's delicate condition from the other guests. And her dashing beau, Darcy's (naturally) working undercover on a dangerous mission. Then her actress mother shows up, with a not-so-little task to perform. With all this subterfuge, it seems something is bound to go horribly wrong—and Georgie will no doubt be left to pick up the pieces when it does.