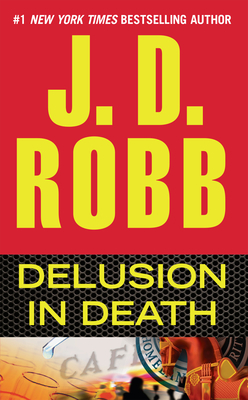 This is book number 35 in the In Death series.

Lieutenant Eve Dallas must foil a terrorist plot in this explosive thriller in the #1 New York Times bestselling In Death series.

It was just another after-work happy hour at a bar downtown—until the madness descended. And after twelve minutes of chaos and violence, more than eighty people lay dead.

Lieutenant Eve Dallas is trying to sort out the inexplicable events. Surviving witnesses talk about seeing things—monsters and swarms of bees. They describe sudden, overwhelming feelings of fear and rage and paranoia. When forensics makes its report, the mass delusions make more sense: it appears the bar patrons were exposed to a cocktail of chemicals and illegal drugs that could drive anyone into temporary insanity—if not kill them outright.

But that doesn’t explain who would unleash such horror—or why. Eve’s husband, Roarke, happens to own the bar, but he’s convinced the attack wasn’t directed at him. It’s bigger than that. And if Eve can’t figure it out fast, it could happen again, anytime, anywhere. Because it’s airborne…

“Biological terrorism is stalking New York residents in the newest installment of Robb’s extraordinary In Death series. While the main plot is diabolical and chilling, what makes this book really compelling is having Eve Dallas make progress dealing with her past. After so many books, these characters feel like family, which makes their adventures resonate all the more.”—RT Book Reviews

“While Robb serves up twists and turns in ample portions, the main attraction is still the character of Eve, who will win over readers with her ability to persevere in seeking a killer while coping with her personal demons.”—Publishers Weekly