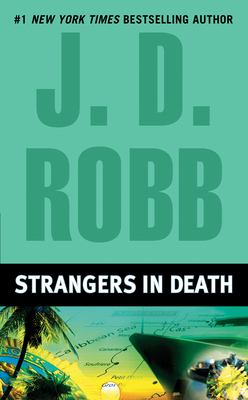 This is book number 26 in the In Death series.

Lieutenant Eve Dallas explores the hidden connections among friends and lovers, enemies and strangers in this thriller in the #1 New York Times bestselling In Death series.

In 2060 New York, some murders still get more attention than others, especially those in which the victim is a prominent businessman, found in his Park Avenue apartment, tied to the bed—and strangled—with cords of black velvet. Fortunately, homicide cop Lt. Eve Dallas’s billionaire husband Roarke happens to own the prime real estate where Thomas Anders’s sporting-goods firm was headquartered, giving her some help with access. Before long, she’s knocking on doors—or barging through them—to look for the answers she needs.

But some things don’t add up—and everyone’s alibi checks out, from the wife who was off in the tropics to the nephew who stood to inherit millions. Was this a crime of passion—or a carefully planned execution? It’s up to Dallas to solve a sensational case in which those who seem to be intimates sometimes guard secrets from each other—and strangers may be connected in unexpected, and deadly, ways...

“Settle back for another eminently entertaining chapter in this first-rate and long-running detective series. Early on strong-willed Lt. Eve Dallas pegs her suspect, but what follows is a thriller that also becomes a personal battle of wills. Robb has created a cunning killer who uses money and a sympathetic façade to divert suspicion. But, as many a killer can attest, never bet against Eve Dallas!”—RT Book Reviews