Tempests and Slaughter (The Numair Chronicles, Book One) (Paperback) 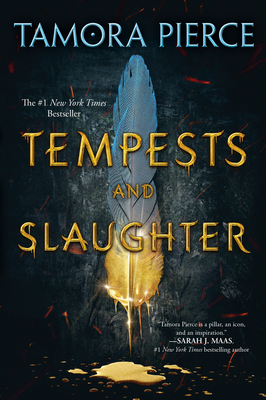 This must-read fantasy from an author who is legend herself--Tamora Pierce--is one Bustle calls "the perfect book for die-hard Pierce fans and newcomers alike."

Discover the origin story of one of the realm's most powerful mages in the first book in the Numair Chronicles.

Arram Draper is on the path to becoming one of the realm's most powerful mages. The youngest student in his class at the Imperial University of Carthak, he has a Gift with unlimited potential for greatness--and for attracting trouble. At his side are his two best friends: Varice, a clever girl with an often-overlooked talent, and Ozorne, the "leftover prince" with secret ambitions. Together, these three friends forge a bond that will one day shape kingdoms. And as Ozorne gets closer to the throne and Varice gets closer to Arram's heart, Arram realizes that one day--soon--he will have to decide where his loyalties truly lie.

In the Numair Chronicles, readers will be rewarded with the never-before-told story of how Numair Salmalín came to Tortall. Newcomers will discover a YA fantasy where a kingdom's future rests on the shoulders of a talented young man with a knack for making vicious enemies.

"Tamora Pierce is one of the queens of fantasy, and as a fan of the Immortals series most of all, I was happy to be reunited with the world of Tortall and literary crush Numair Salmalín." --The Mary Sue

TAMORA PIERCE is the #1 New York Times bestselling author of over eighteen novels set in the fantasy realm of Tortall. She first captured the imagination of readers with her debut novel, Alanna: The First Adventure. Since then, her bestselling and award-winning titles have pushed the boundaries of fantasy and young adult novels to introduce readers to a rich world populated by strong, believable heroines. Her books have been translated into many languages, and some are available on audio from Listening Library and Full Cast Audio. In 2013, she won the Margaret A. Edwards Award for her “significant and lasting contribution to young adult literature.” Pierce lives in Syracuse, New York, with her husband, Tim, and their cats, birds, and occasional rescued wildlife. Visit her at TamoraPierce.com and follow her on Twitter at @TamoraPierce.

“Tamora Pierce is a seminal figure in the fantasy field of writing, turning out one terrific book after another.”
—TERRY BROOKS, New York Times bestselling author of the Sword of Shannara trilogy

“In the world of YA fantasy, there’s before Tamora Pierce, and then after her female heroes started kicking down the doors (and walls, and other barriers)!”
—BRUCE COVILLE, New York Times bestselling author

“Tamora Pierce is a trailblazer for so many fantasy writers, hacking through the old tropes with her narrative machete and showing us that girl-centered adventures are not just possible but amazing.”
—RACHEL HARTMAN, New York Times bestselling author

“Tamora Pierce is gloriously unafraid to give her readers joy and laughter along with adventure and struggle, to let us love her characters wholeheartedly and find the best of ourselves in them.”
—NAOMI NOVIK, New York Times bestselling author

“Tamora Pierce and her brilliant heroines didn’t just break down barriers; they smashed them with magical fire.”
—KATHERINE ARDEN, author of The Bear and the Nightingale

“Tamora Pierce is the queen of YA fantasy, and we are all happy subjects in her court.”
—JESSICA CLUESS, author of A Shadow Bright and Burning

“Tamora Pierce’s novels gave me a different way of seeing the world.”

—ALAYA DAWN JOHNSON, award-winning author of Love Is the Drug

"Tamora Pierce is one of the queens of fantasy, and as a fan of The Immortals series most of all, I was happy to be reunited with the world of Tortall and literary crush, Numair Salmalín."
—The MarySue

"Rich in world-building detail, Tempests and Slaughter is a slow-burner that illuminates the personal and political intrigues at the heart of the Immortals quartet."
—The Guardian