Motherhood and Hollywood: How to Get a Job Like Mine (Paperback) 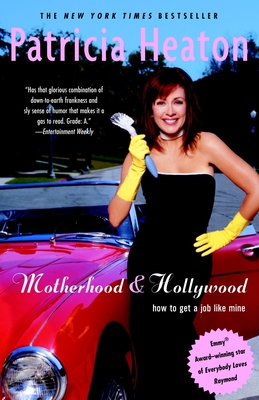 Motherhood and Hollywood is Patricia Heaton’s humorous and poignant collection of essays on life, love, marriage, child-rearing, show business, having parents, being a parent, spousal rage, surviving fame, success, and the shame of underarm flab. She is warm, witty, and refreshingly irreverent.

Heaton grew up in suburban Cleveland, one of five children of devout Roman Catholic parents. Her father was a noted sportswriter for The Plain Dealer; her mother died suddenly and unexpectedly when Heaton was twelve. Love, fast food, and an unflagging sense of humor held the clan together and propelled Patricia on a showbiz career that began with hilariously nightmarish struggles in New York, eventually leading to a triumphant move to Los Angeles.

In Motherhood and Hollywood, Patricia Heaton pours out her heart and minces no words. She’s taking all prisoners for cookies and a glass of Jack Daniel’s and diet ginger ale. Laughter ensues.

Patricia Heaton graduated from Ohio State University and made her Broadway debut in the gospel musical Don’t Get God Started. She has appeared in numerous television films and series, and in feature films including Memoirs of an Invisible Man, Beethoven, The New Age, and Space Jam. For her role in Everybody Loves Raymond, she won the Emmy for Leading Actress in a Comedy Series in 2000 and again in 2001. She lives with her husband and four sons in Los Angeles.

“Has that glorious combination of down-to-earth frankness and sly sense of humor that makes it a gas to read. Grade: A.” —Entertainment Weekly

“Funny and clever, bawdy and verbally fearless.” —The Washington Post

“Engaging, effervescent . . . An upbeat memoir that doesn’t obsess about the rough times but instead is beguilingly sensible and wise about what’s important: the author’s family, faith, and craft . . . An invigorating breath of fresh air.” —Kirkus Reviews