The Issa Valley: A Novel (Paperback) 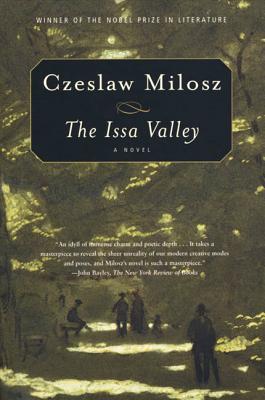 Thomas, the child-protagonist of The Issa Valley, is subject to both the contradictions of nature in this severe northern setting and sometimes enchanting, sometimes brutal timbre of village life. There are the deep pine and spruce forests, the grouse and the deer, and the hunter's gun. There is Magdalena, the beautiful mistress of the village priest, whose suicide unleashes her ghost to haunt the parish. There are also the loving grandparents with whom Thomas lives, who provide a balance of the not-quite-Dostoevskian devils that visit the villagers. In the end, Thomas is severed from his childhood and the Issa River, and leaves prepared for adventures beyond his valley. Poetic and richly imagined, The Issa Valley is a masterful work of fiction from one of our greatest living poets.

“An idyll of immense charm and poetic depth...It takes a masterpiece to reveal the sheer unreality of our modern creative modes and poses, and Milosz's novel is such a masterpiece.” —John Bayley, The New York Review of Books

“Not only an impressive but an immediately appealing novel...The Issa Valley has the sensuousness and immediacy one associates with novels apparently inspired by the writer's own childhood recollections: David Copperfield and The Mill on the Floss come to mind.” —Michael Irwin, The Times Literary Supplement

“Nothing rings false in this poetic and realistic tale. Even the scenes that...belong to another time and place will hold your attention to the end.” —Elie Wiesel, Chicago Tribune

“A lyrical account of a rural boyhood, dominated by family, nature and village life...One is constantly aware of being in the hands of a master--of a talent that is original, unhurried, almost serene...He is a remarkable writer.” —Larry McMurtry, The Washington Star

“Superficially, The Issa Valley is a boyhood novel of discovery, a kind of Huckleberry Finn if the latter had been written by a poet/lover. But for the adult narrator, it is an act of self-recovery preceded by, and indeed contingent upon, a recovery of the world, in as unmediated a manner as it is possible to do and still remain within the power of language to describe. That is, it is a recovery of the the poetic self.” —Louis Iribarne, World Literature Today