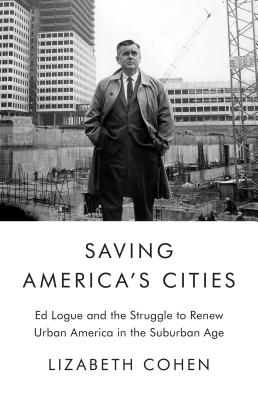 By Lizabeth Cohen
$35.00
Available from our Distributors - Usually Ships in 1-5 Days

Winner of the Bancroft Prize

In twenty-first-century America, some cities are flourishing and others are struggling, but they all must contend with deteriorating infrastructure, economic inequality, and unaffordable housing. Cities have limited tools to address these problems, and many must rely on the private market to support the public good.

It wasn’t always this way. For almost three decades after World War II, even as national policies promoted suburban sprawl, the federal government underwrote renewal efforts for cities that had suffered during the Great Depression and the war and were now bleeding residents into the suburbs. In Saving America’s Cities, the prizewinning historian Lizabeth Cohen follows the career of Edward J. Logue, whose shifting approach to the urban crisis tracked the changing balance between government-funded public programs and private interests that would culminate in the neoliberal rush to privatize efforts to solve entrenched social problems. A Yale-trained lawyer, rival of Robert Moses, and sometime critic of Jane Jacobs, Logue saw renewing cities as an extension of the liberal New Deal. He worked to revive a declining New Haven, became the architect of the “New Boston” of the 1960s, and, later, led New York State’s Urban Development Corporation, which built entire new towns, including Roosevelt Island in New York City.

Logue’s era of urban renewal has a complicated legacy: Neighborhoods were demolished and residents dislocated, but there were also genuine successes and progressive goals. Saving America’s Cities is a dramatic story of heartbreak and destruction but also of human idealism and resourcefulness, opening up possibilities for our own time.

Lizabeth Cohen is the Howard Mumford Jones Professor of American Studies at Harvard University and the former dean of the Radcliffe Institute for Advanced Study. She is the author of Making a New Deal: Industrial Workers in Chicago, 1919–1939, a finalist for the Pulitzer Prize and winner of the Bancroft Prize, and A Consumers' Republic: The Politics of Mass Consumption in Postwar America.

"[Cohen] has not only taken the measure of a complicated man, but also provided an incisive treatment of the entire urban-planning world in America in the last half of the 20th century . . . [She] has created a more enlightening book than has appeared on this topic in quite some time." —Alan Ehrenhalt, The New York Times

"Kudos to Harvard professor Lizabeth Cohen for exhuming the cantankerous, ambitious and idealistic Logue in her charming and successful biography-cum-urban affairs history . . . Ms. Cohen ennobles [Logue's] life story, telling it as an impassioned crusade for things that sound old-fashioned now but were and are worth caring about: racial and socioeconomic integration of neighborhoods; respectable public housing for lower-income Americans; and social services and decent schooling for all . . . Engrossing." —Alex Beam, The Wall Street Journal

“As cities across the country and around the world struggle to cope with the ongoing pandemic, it is an opportune time to read Saving America’s Cities, Lizabeth Cohen’s excellent study of postwar urban planning . . . With deep archival research and a narrative sweep that fixes her subject in the arc of midcentury US history, Cohen sketches Logue vividly, illuminating his forcefulness, his passion, his masculine confidence. She also provides a painful account of what he and so many liberals of his generation were up against. The contrast between these two aspects of her story—Logue’s certitude crashing into the limits of what he was able to accomplish—at times makes Saving America’s Cities read a bit like a claustrophobic horror story.” —Kim Phillips-Fein, The Nation

"Lizabeth Cohen offers a complex portrait of Logue . . . Urban renewal makes an easy foil against which designers, planners, and politicians can contrast their proposals . . . It’s worth revisiting a time when a strong government hand was seen as necessary for creating a vibrant city . . . Logue is a more complicated figure who shows how urban renewal was an experiment with successes and failures." —Courtney Humphries, The Boston Globe

"Vivid and discerning . . . Saving America’s Cities is remarkable, unique even, among the many chronicles of urban renewal’s failures. By taking readers into the 1970s, Cohen expands the frame for the much-maligned mid-century policy, and argues that urban renewal’s failures and (rare) successes led to an era of planning with rather than for communities . . . It’s hard not to recognize Logue’s story in the persistent dilemmas of our own times." —Samuel Zipp, Public Books

“Sixteen years after her landmark A Consumers' Republic, distinguished historian Lizabeth Cohen reinterprets mid-century urban renewal through the life of Ed Logue . . . Cohen, through meticulous research, paints an intricate, sympathetic portrait . . . Cohen has given readers a book as substantial and complex as the man and controversial movement it explains.” —Sam Kling, Booklist (starred review)

"More than a biography . . . Today, when inequality is on the rise, Saving America’s Cities warns against easy solutions while offering hope that people can improve the places where we live—and with that, people’s lives." —Ann Forsyth, Harvard Magazine

"One of America’s most controversial policies as seen through the career of one of its most outspoken advocates; an essential read." —Library Journal (starred review)

"Is it possible to write not only a good book about urban renewal but also a beautiful one? If you are Lizabeth Cohen, it is. Saving America's Cities is, at once, a new, wise and more balanced take on past efforts to save America's cities and a fascinating portrait of Ed Logue, a central figure in urban policy whose personal trajectory parallels the course of our debates over what works, and what doesn't. If you care about cities, you should read this book. But you should also read it if you simply love a great story full of compelling characters engaged in high-stakes struggles. It's a wonderful achievement." —E. J. Dionne, Jr., author of Our Divided Political Heart, Why the Right Went Wrong and co-author of One Nation After Trump

“Saving America’s Cities is a richly documented account of Ed Logue’s remarkable career. Lizabeth Cohen captures the sense of public purpose and possibility as well as the political battles that made this a distinctive era in the history of American city building. An impressive achievement that speaks to all who care about the fortunes of urban America—past, present, and future.“ —Alice O'Connor, Professor and Director, University of California–Santa Barbara Blum Center on Global Poverty Alleviation and Sustainable Development

"In some ways, Edward Logue was an imperial master builder, a latter-day version of Robert Moses. But in others—particularly in his abiding concern for the welfare of our cities’ poor and powerless—he could not have been more different. Lizabeth Cohen’s penetrating study of the man and his era sees both Logue and the post-war urban America he tried to rebuild clearly, and persuasively. It’s quite a story, very well told." —Daniel Okrent, author of The Guarded Gate and Last Call

"This captivating biography of Ed Logue explains how a largely-forgotten liberal power broker made a profound but little-known impact on the urban landscape we still inhabit. One of our most distinguished historians, Lizabeth Cohen illuminates the struggle to make cities both viable and democratic that shaped postwar America. At a time when ordinary people can barely afford to live in America’s biggest cities, Cohen’s book is a necessary book to read." —Michael Kazin, Professor of History, Georgetown University, and author of War Against War: The American Fight for Peace, 1914-1918

"For a few decades near the end of the twentieth century, the United States embraced the idea that it was the government’s responsibility to rebuild the country’s deteriorating cities. In her vividly told and meticulously researched biography of Edward Logue, the high-flying master rebuilder of East Coast cities, Lizabeth Cohen has brought this vanished era fully back to life, and persuasively demanded a new respect for its achievements." —Nicholas Lemann, Joseph Pulitzer II and Edith Pulitzer Moore Professor of Journalism, Columbia University, and author of Transaction Man

"Lizabeth Cohen has written a terrific biography of the American city planner Ed Logue—a man of huge talent and equally staggering ego. Her account of Logue's rise and fall is both personally gripping and illuminates how American cities in the last century have tried, and failed, to balance the claims of cash, class, and race. Her scholarship is impeccable; her writing is a sheer pleasure." —Richard Sennett, Centennial Professor of Sociology, London School of Economics, and author of Building and Dwelling

"Lizabeth Cohen's Saving America's Cities is an engaging and well-crafted book that brilliantly captures the important legacy of the urban planner Edward J. Logue. I learned a great deal reading her compelling story, which provides a fresh reexamination of postwar urban renewal, and suggests how American cities can be made more dynamic and equitable." —William Julius Wilson, Lewis P. and Linda L. Geyser University Professor, Harvard University, and author of The Truly Disadvantaged: The Inner City, the Underclass, and Public Policy

"In this myth-shattering book, Liz Cohen offers an important reassessment of urban renewal in postwar America. Clear-eyed and convincing, Saving America’s Cities not only accounts for the failures of federal policies in this period but also salvages the often-overlooked success stories as well. In the end, Cohen makes great use of the past to suggest new paths for the future." —Kevin M. Kruse, Professor of History, Princeton University

"The history of urban renewal in American cities is typically portrayed as a tale of heroes vs. villains, personified in the epic struggle between Jane Jacobs and Robert Moses in 1950s and 1960s New York City. Lizabeth Cohen’s detailed historical research provides a powerful new lens to view this disturbing yet formative time in the history of America’s great cities. Her lens is the evolution of Ed Logue, the so-called “Master Rebuilder,” in dealing with the urban crisis of New Haven, Boston, and New York. She dismantles the oversimplified tale of good and evil, understanding Logue’s evolution in the context of the massive economic, demographic, and social forces acting on our cities, their residents, and their city-builders. She ends up providing a new more usable history of the role of great city-builders like Logue and of government involvement in the complex evolution of our cities. Mayors, urban developers, and city builders, as well as urban historians, all have much to learn from her compelling new narrative." —Richard Florida, University Professor, University of Toronto, and author of The Rise of the Creative Class and The New Urban Crisis.