Paris Is a Party, Paris Is a Ghost: A Novel (Hardcover) 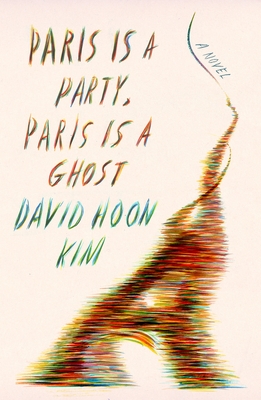 In a strangely distorted Paris, a Japanese adoptee is haunted by the woman he once loved

When Fumiko emerges after one month locked in her dorm room, she’s already dead, leaving a half-smoked Marlboro Light and a cupboard of petrified food in her wake. For her boyfriend, Henrik Blatand, an aspiring translator, these remnants are like clues, propelling him forward in a search for meaning. Meanwhile, Fumiko, or perhaps her doppelgänger, reappears: in line at the Louvre, on street corners and subway platforms, and on the dissection table of a group of medical students.

Henrik’s inquiry expands beyond Fumiko’s seclusion and death, across the absurd, entropic streets of Paris and the figures that wander them, from a jaded group of Korean expats, to an eccentric French widow, to the indelible woman whom Henrik finds sitting in his place on a train. It drives him into the shadowy corners of his past, where his adoptive Danish parents raised him in a house without mirrors. And it mounts to a charged intimacy shared with his best friend’s precocious daughter, who may be haunted herself.

David Hoon Kim’s debut is a transgressive, darkly comic novel of becoming lost and found in translation. With each successive, echoic chapter, Paris Is a Party, Paris Is a Ghost plunges us more deeply beneath the surface of things, to the displacement, exile, grief, and desire that hide in plain sight.

David Hoon Kim is a Korean-born American educated in France, who took his first creative writing workshop at the Sorbonne before attending the Iowa Writers’ Workshop, the Stegner Program, and the Fine Arts Work Center in Provincetown. In addition to The New Yorker, his fiction has appeared in French-language publications such as Brins d’éternité, Le Sabord, Brèves, and XYZ La revue de la nouvelle. He has been awarded fellowships from the Michener-Copernicus Society of America, the MacDowell Colony, Yaddo, the Elizabeth George Foundation, among others. He writes in both English and French.

"A haunting and surreal debut . . . Vividly drawn characters . . . A powerful exploration of universal feelings of loneliness and of profound disconnection from others . . . Startlingly original."
—Doug Battersby, Financial Times

"It can be tempting to read Paris Is a Party, Paris Is a Ghost as an immigrant’s tale, a doleful, beautifully written study of the confused yearnings and scars of exile. But the identity crisis here is deeper, roiled by the universal, often doomed impulse to imbue meaning where it no longer exists . . . [The narrator's] realizations land with the grace and pain of someone who knows what he’s looking for can’t be found."
—David Kim, The New York Times Book Review

"Kim is an excellent sentence-level writer, eschewing both floweriness and over-simplicity. He treads lightly, but there are never any missteps, and his intelligence shines through in the easy flow of his prose."
—John Gu, Chicago Review of Books

"[A] hypnotic, inventive debut . . . A brilliant and absurd meditation on what it means to be haunted, and I couldn't put it down."
—Arianna Rebolini, BuzzFeed (Most Anticipated)

"A haunting, surreal story of loss, and of being lost . . . Darkly comic."
—Frenchly

“The kind of book that holds you in a dream as you read it, intricate and frictionless and always marvelous. David Hoon Kim in his deep understanding of the strangeness of human experience and the connective bands between past, present, and future, belongs in the same company as writers like Emily St. John Mandel and Lauren Groff.”
—Kelly Link, author of Get in Trouble

“Paris Is a Party, Paris Is a Ghost wasn’t like anything I’d read before: an adventure among languages, but also Paris, about the ways languages control us—the ones we grew up with, the ones we learn as adults, the ones we never learn but might have—and how they set boundaries we almost never see, on our lives, our desires, our sense of possibility, even our ghosts, except in glimpses. I left haunted in ways I hadn’t thought possible.”
—Alexander Chee, author of The Queen of the Night

“An elegant book, shot through with eeriness and intelligence. A genuinely spooky, strange, and compulsive read, like walking through a cemetery and reading the tombstones while the eyes of crows watch your back.”
—Namwali Serpell, author of The Old Drift

“In Paris Is a Party, Paris Is a Ghost, the characters pursue one another through morgues, cemeteries, and catacombs. And yet the book is replete with the wonders of life, explored by a narrator who catalogues the scents and tastes and voices of Paris in exquisite detail. David Hoon Kim has created a novel so rich with synchronicity and mystery that when you set it down and rejoin the world, the familiar landmarks of your daily life seem filled with hidden possibilities.”
—Anjali Sachdeva, author of All the Names They Used for God