The Return of the King: The Lord of the Rings: Part Three (Mass Market) 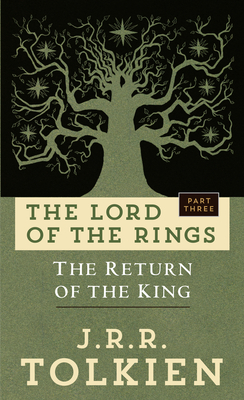 The awesome conclusion to The Lord of the Rings—the greatest fantasy epic of all time—which began in The Fellowship of the Ring and The Two Towers.

While the evil might of the Dark Lord Sauron swarms out to conquer all Middle-earth, Frodo and Sam struggle deep into Mordor, seat of Sauron’s power. To defeat the Dark Lord, the One Ring, ruler of the accursed Rings of Power, must be destroyed in the fires of Mount Doom. But the way is impossibly hard, and Frodo is weakening. Weighed down by the compulsion of the Ring, he begins finally to despair.

John Ronald Reuel Tolkien was born on January 3, 1892, in Bloemfontein, South Africa. After serving in World War I, he embarked upon a distinguished academic career and was recognized as one of the finest philologists in the world. He was a professor of Anglo-Saxon at Oxford, a fellow of Pembroke College, and a fellow of Merton College until his retirement in 1959. He is, however, beloved throughout the world as the creator of Middle-earth and author of such classic works as The Hobbit and The Lord of the Rings. He died on September 2, 1973, at the age of eighty-one.

“There are very few works of genius in recent literature. This is one.”—The Nation