The Memoirs of Stockholm Sven (Paperback) 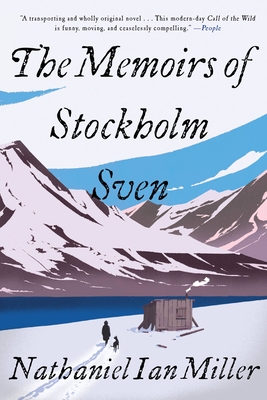 “Wow, what a book. The world and the characters grow together. In a bleak, unforgiving landscape, Sven is able to discover found family and grow as a person, while offering hard-won insights about human nature that’ll leave you breathless.”
— Jessica Williams-Sullivan, Politics and Prose Bookstore, Washington, DC

In this "briskly entertaining" (New York Times Book Review), "transporting and wholly original" (People Magazine) novel, one man banishes himself to a solitary life in the Arctic Circle, and is saved by good friends, a loyal dog, and a surprise visit that changes everything.

In 1916, Sven Ormson leaves a restless life in Stockholm to seek adventure in Svalbard, an Arctic archipelago where darkness reigns four months of the year and he might witness the splendor of the Northern Lights one night and be attacked by a polar bear the next. But his time as a miner ends when an avalanche nearly kills him, leaving him disfigured, and Sven flees even further, to an uninhabited fjord. There, with the company of a loyal dog, he builds a hut and lives alone, testing himself against the elements.

The teachings of a Finnish fur trapper, along with encouraging letters from his family and a Scottish geologist who befriended him in the mining camp, get him through his first winter. Years into his routine isolation, the arrival of an unlikely visitor salves his loneliness, sparking a chain of surprising events that will bring Sven into a family of fellow castoffs and determine the course of the rest of his life.

Written with wry humor and in prose as breathtaking as the stark landscape it evokes, The Memoirs of Stockholm Sven is a testament to the strength of our human bonds, reminding us that even in the most inhospitable conditions on the planet, we are not beyond the reach of love.

Finalist for the Vermont Book Award

Longlisted for the Center for Fiction First Novel Prize

Nathaniel Ian Miller, who holds an MFA in Creative Writing and MS in Environmental Studies from the University of Montana, is a former resident in the Arctic Circle Expeditionary Program. He has written for Virginia Quarterly Review, and for newspapers in Wisconsin, New Mexico, Montana, and Colorado, for which he received multiple Associated Press Awards. He lives with his family on a farm in central Vermont.

“Briskly entertaining . . . I was reminded more than once of Annie Proulx’s The Shipping News . . . combines a distinctive northerly setting with a cast of likable eccentrics . . . Rather than any creed or belief system, it is Sven’s various friendships, intense but understated, that sustain him and give his life an order and purpose.”—Ian McGuire, New York Times Book Review

“Transporting and wholly original . . . this modern-day Call of the Wild is funny, moving, and ceaselessly compelling.”—People (Book of the Week)

“Ceaselessly brilliant as an arctic sun, The Memoirs of Stockholm Sven illuminates the very nature of human yearning and perseverance. In attempting to inhabit the uninhabitable, one man shows us that no place is inhospitable to the human heart, and in delivering this searing portrait, Nathaniel Ian Miller ascends to the firmament of today’s most exciting young novelists.”—Adam Johnson, Pulitzer Prize–winning author of The Orphan Master’s Son

“Surprisingly humorous, this heartwarming story reminds us that love can reach the iciest depths of our hearts, even in the most inhospitable locations.”—Kirby Beaton, Buzzfeed

“A book one savors for its prose, its characters, and its insights… The Memoirs of Stockholm Sven explores many varieties of aloneness—and togetherness—with enormous insight, empathy, and humor… [Miller is] a skilled writer.”—Margot Harrison, Seven Days Vermont

“Captivating . . . Miller offers a marvelously detailed look at a way of life and a profession practiced in an extreme environment, and though purportedly based on a historical figure, the character’s colorfully rendered experiences are the stuff of powerful dramatic fiction.”—Publishers Weekly (starred review)

“Readers will love the beauty and depth of his story . . . A Swedish trapper relates his unique life with insights about friendship, hardship, and solitude.”—Kirkus (starred review)

“Miller’s prose is lit by sparks of Sven’s somber humor and descriptive elegance . . . Miller's characterization is exceptional and thoroughly engaging, as are the vividly portrayed island denizens . . . Miller has given [Sven] an imagined life told in his own words in this engrossing fictional memoir.”
—Bethany Latham, Booklist (starred review)

“A stellar first novel . . .  So authentic in both detail and narrative voice that it’s easy to forget it’s not an actual memoir . . . A truly walloping tale of solitude and survival told in visceral detail, a combination of Miller’s wild imagination and his beautifully precise prose . . . Sven is an insightful yet comically ironic narrator, and there is often great excitement in his story, including ‘ice bear’ attacks, near starvation, Northern Lights, and the haunting sounds of calving glaciers . . . Miller imbues his novel with an unforgettable narrator who asks essential questions of human connection, a remarkable achievement for a novel ostensibly about solitude . . . Like the Arctic landscape itself, The Memoirs of Stockholm Sven is beautifully stark and unimaginably rich, a book that will long be remembered by its lucky readers.”—Alice Cary, BookPage (starred review)

“The Memoirs of Stockholm Sven is pure delight. From the first page, I was transported to a world unlike any I’ve experienced or even read about—a bleak and unforgiving landscape where ice bears, subzero temperatures, and Sven’s own worst impulses conspire against him, where loneliness and terror coexist with his growing appreciation for the flinty beauty of life. Only in such a place, I came to understand, could such a solitary man—emotionally stunted, misanthropic, self-pitying, disfigured—discover the bonds of friendship, and find family in a ragtag band of misfits. This novel’s hard-won wisdom, droll humor, and offhanded insights about human nature will pierce you to the core.”—Christina Baker Kline, New York Times bestselling author of Orphan Train and The Exiles

“A kind of Odyssey, complete with dogs worthy of Argos and a few precious human companions, this spare and unusual novel plumbs the dark side of polar narratives. Sven, as mysterious to himself as he is to us, is an unforgettable character.”—Andrea Barrett, National Book Award–winning author of The Voyage of the Narwhal and Ship Fever

“The magic of The Memoirs of Stockholm Sven is in its defiance of dark expectations. Sven is a bright but disaffected urban bookworm who moves to one of the most forbidding landscapes on earth, finds dangerous work, suffers a hideous maiming, and hides his appearance by retreating into even greater isolation. And it is here, at the doorway to unmitigated despair, that Nathaniel Ian Miller truly surprises and shines. For all Sven’s damages, his desolation makes each visitor indelible, as into his arctic dystopia traipses a cast of emotionally damaged misfits, estranged family members, military outlaws whose crime is love, an irresistible scrounge of a dog, a gifted trapper of few words and a kind geologist of many, until we are regaled with some of the most convincing portrayals I’ve seen of human beings creating connection and kindnesses despite their brutal circumstances and unhealed wounds.”—David James Duncan, author of the national bestsellers The River Why and The Brothers K

“Nathaniel Ian Miller’s vision of the Arctic is one of sharp-toothed beauty and harrowing, clarifying hardship. The men and women who manage to survive the landscape are transformed by the effort, forced to question who they are and who they want to be. Their surprising, rule-breaking lives invite the reader on both a polar adventure and a consideration of what makes our lives worth living.”—Caitlin Horrocks, author of The Vexations

“The beauty of the writing in this debut turns this into much more than a story about the Arctic. Sven sees himself as wholly unremarkable, and yet his observant eye and keen sense of humanity make him one of the most relatable characters I’ve encountered . . . A beautiful read.”—Ginny Wehrli-Hemmeter, Anderson’s Bookshop, Naperville, IL

“A stunning novel . . . Life is never quite what we think it is going to be, and in the High Arctic there are even more surprises that test every ounce of our soul. I loved this.”—Annie Philbrick, Bank Square Books, Mystic, CT

“The stark beauty of the Arctic so beautifully detailed in Nathaniel Ian Miller’s debut is only second to the marvelous cast of characters he brings to life . . . Stockholm Sven discovers that connection and family are possible in even the most daunting of circumstances. Miller’s gorgeous book reminds us that the greatest skill humanity possesses is our capacity to love.”—Luisa Smith, Book Passage, Corte Madera, CA

“This is a rich, multifaceted treasure of a novel which I could hand to anyone with complete confidence . . . Miller provides unforgettable characters, a deeply mesmerizing tale, and the most exquisite prose.”—Damita Nocton, Country Bookshop, Southern Pines, NC

“This book is simply glorious . . . I know that seems odd to say about the brutal life in the Arctic, but Stockholm Sven will seep into your consciousness and make even the most harrowing and abominable seem common in this place he calls home. You will not soon forget these characters and the lengths they go through to survive and thrive."—Julie Slavinsky, Warwick’s, La Jolla, CA

“I don’t know that I’ve ever come across a book more satisfying to my inner misanthrope . . . Anyone who constantly longs for quiet, feels prickly in an overcrowded space, loves the idea of unfettered alone time: this book is for you . . . Nathaniel Ian Miller has written a novel that, in showing us extreme isolation, re-minds us how vital our bonds to this world are. I adored it.”—Lindsay Lynch, Parnassus Books, Nashville, TN

“A stunningly honest historical novel that depicts the hardships of life in the frigid far north . . . A moving tale written with the kind of tenderness that makes you want to put your arms around the people who make this lovely book a treasure to read.”—Vicki Honeyman, Literati Bookstore, Ann Arbor, MI

“Nathaniel Ian Miller has woven a luminous tale of enduring friendships and companionship, familial love and the incredible beauty of a harsh natural world. This is one of those rare reads where you keep caring about the characters once you’ve closed the book. Deeply satisfying!”—Françoise Brodsky, Shakespeare & Company, New York, NY