Palo Alto: A History of California, Capitalism, and the World (Hardcover) 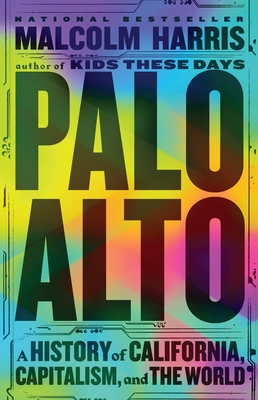 The history of Silicon Valley, from railroads to microchips, is an “extraordinary”* story of disruption and destruction, told for the first time in this comprehensive, jaw-dropping narrative. (*Greg Grandin, Pulitzer Prize-winning author of The End of the Myth)

Palo Alto’s weather is temperate, its people are educated and enterprising, its corporations are spiritually and materially ambitious and demonstrably world-changing. Palo Alto is also a haunted toxic waste dump built on stolen Indian burial grounds, and an integral part of the capitalist world system.

In PALO ALTO, the first comprehensive, global history of Silicon Valley, Malcolm Harris examines how and why Northern California evolved in the particular, consequential way it did, tracing the ideologies, technologies, and policies that have been engineered there over the course of 150 years of Anglo settler colonialism, from IQ tests to the "tragedy of the commons," racial genetics, and "broken windows" theory. The Internet and computers, too. It's a story about how a small American suburb became a powerful engine for economic growth and war, and how it came to lead the world into a surprisingly disastrous 21st century. PALO ALTO is an urgent and visionary history of the way we live now, one that ends with a clear-eyed, radical proposition for how we might begin to change course.

Malcolm Harris is a freelance writer and the author of Kids These Days: The Making of Millennials and Shit is Fucked Up and Bullshit: History Since the End of History. He was born in Santa Cruz, CA and graduated from the University of Maryland.

“Malcolm Harris's singular and brilliant PALO ALTO is a geologic survey of the bedrock of the imperial violence that lies beneath the surface of some of the country's wealthiest ZIP Codes.  The formations it follows stretch outward across the globe, to Asia, Europe, across the Americas and to the rest of the United States.  In the end, the book provides not so much an account of strict cause and effect—the familiar history of the robber barons and tech tycoons—but a core sample of the thorough-going greed and pillage at the heart of American history: the expropriation, the violence, and the guilt that seep upward through the soil of neoliberalism's most fruitful plain.”—Walter Johnson, Winthrop Professor of History and African American Studies at Harvard University and author of The Broken Heart of America

"Extraordinary. In lucid, personal, often funny, and always insightful prose, Malcolm Harris finds the driving thrust of reaction not in capitalism’s left-behind regions but in its vanguard: California, and specifically Silicon Valley.  We have not yet felt the full force of the shit storm that the titans of tech have been conjuring. We soon will.  If you want to understand what’s coming, you need to read this book."

—Greg Grandin, Pulitzer Prize-winning author of The End of Myth

“Harris’s earlier book Kids These Days was a broad cultural history of millennials, zeroing in on the unfair economic stereotypes that have dogged the generation. Now, he tells an ambitious story of Silicon Valley, showing how its specific culture and history allowed it to become the site of both breathtaking technological advancement and capitalist exploitation.”—Joumana Khatib, THE NEW YORK TIMES

"Harris’s writing is astute and clear, accessible but never watered down. Like Silicon Valley, this book promises a lot, but unlike Silicon Valley, Harris is far more likely to deliver with this 'radical proposition for how we might begin to change course' to escape from the wasteland of technological progress."—Isle McElroy, VULTURE

“A searching history of California and its role in predatory, extractive capitalism…[Harris] proposes a program of divestiture and restitution, including ‘the forfeit of Stanford’s vast accumulated wealth,’ that is breathtaking in its audacity…highly readable, sharply argued and well researched.”

“Malcolm Harris traces exactly how Silicon Valley was built – from its origin as a haunted toxic waste dump built on stolen Native burial grounds to the powerful and often disastrous tech engine it is today.”—NYLON, Must Read Books of February 2023

“A monumental work of research and imagination, Palo Alto is destined to sit on a high shelf next to other unforgettable works of national history.”—Adrienne Westenfeld, ESQUIRE, Best Books of 2023

"From 19th-century railroad barons to the counterculture capitalists of the 1970s, Harris tells a story of wanton hubris and curdled idealism, one that seeks to account for the global rise—in tech, in war, in capitalism—of an otherwise forgettably pleasant suburb of San Jose."—Jonny Diamond, Literary Hub, Most Anticipated Books of 2023

“Harris painstakingly connects literature, geography, and economics to understand Palo Alto's history and its relationship to capitalism…Readers interested in U.S. history, particularly pertaining to capitalism and technology, will find an engaging and clear-eyed Silicon Valley tale of a small city with global importance.”—BOOKLIST

“Harris’s comprehensive history of Silicon Valley, from railroad capitalism to free love to big tech, does just that.Palo Alto spans centuries in order to thoroughly demystifying the region’s economics and unearth its enduring legacy of settler colonialism.”—THE MILLIONS, Most Anticipated Books of 2023

“Harris traces over a hundred years of colonialism to explore how this unlikely suburb became the mecca for the digital gold rush. This book's time is definitely now.”—Alison Stine, SALON, Best Books of 2023

“With this powerfully written and deftly articulated treatise, Harris has produced a comprehensive look at how Silicon Valley grew into the all-consuming power center it is today.”—ALTA, Most Anticipated Books of 2023

“a rollicking 600+ history that runs the gamut from antiwar movements to racial genetics to the Hewlett Packard garage.”—MIT Technology Review

"It feels wild to call this 720-page tome 'immensely readable,' but it is! Harris has deeply researched and developed his analysis of 170 years of history, and synthesizes it with skill into prose that's both understandable and a joy to read."—Michelle C., Powell's Books

“In Palo Alto, Malcolm Harris gives us a comprehensive deep-dive into the history of the Silicon Valley. From stomping on the Indigenous peoples, to immigration, railroading, the gold rush, and all of the other elements found in the history of Northern California, we learn when, how and why certain people came to power and what they did with that power… This is a long read, but well worth the time and effort. So much to learn on these pages!”—Auntie's Bookstore (Spokane, Washington)

"For a book whose concepts include global examples, Palo Alto exhibits mastery of local places...Harris has a planner’s ingenuity for the relationship between place and people, but a broader worldview than most of us. Even local issues have global ramifications, and vice-versa."—Asher Kohn, APA California Northern Section